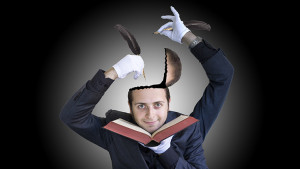 Were you aware that tarantulas have no skin? Did you know that the only predator of butterflies are blue birds? No? Then you need to pop on your 3D glasses and strap yourself in for an hour of weird and wacky facts from “the only person ever who knows everything about everything ever”, Ben Volchok.

This performance is structured like an eccentric TV tonight show complete with guests, audience participation, commercials and a peppy musical sting that it sure to be lodged in your head for days to come. We get a visit from the post-apocalyptic future and a unique incarnation of a public figure currently in the news. Audience members compete to see who has learnt the most and one lucky punter finds out what Infected Primate he or she is. Ben has created a wonderful world with a strange logic, from the unnecessarily convoluted segment introductions to the bizarre products pushed by his sponsors. Over this and his previous show he has built up a number of off stage characters that are brilliantly fleshed out during his viewer letters segment.

What everyone has really come to see are the facts, collections of hilarious one liners presented in short bursts based on a single topic. They are creative and have just enough sheen of plausibility that makes the surrealism all the more powerful. He cleverly links to previous jokes both in succession and from other segments so all jokes clearly have their designated place amongst the seemingly random lines. Ben does plenty of wordplay and clearly loves a pun; it’s amazing how far he pushes a routine in search of them.

Ben’s character work is ultra bare-boned with only a hat as costume and/or a slightly different pitch to his voice. A sly glance shows that he isn’t bothered about convincing the audience to suspend their disbelief, we are all aware it’s a sham and this quirky charm is adorable. There’s a massive song and dance number featuring actual tapping and lots of slapstick that’s impressive but the pre-recorded banter played over the song is a little hard to decipher at times.

Even if you haven’t seen the first instalment, Ben’s Illustrious Fact Show Episode 2 is worth checking out if you like bizarre humour and pointless facts of dubious accuracy. You’re sure to get swept up in the lunacy and never see the world the same way again.