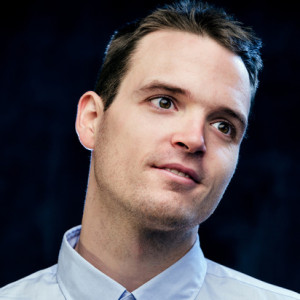 Beep Boop is a wonderful show of modern clowning. Tom Walker treats us to hilarious scenes of silly mime, inspired impressions and lots of audience participation. If the dreaded P Word has sent you running and screaming from the room, fear not; this is the least intrusive, never aggressive and most enjoyable participation a show could ever have. Beginning as a timid Andy Kaufman-esque creature Tom soon blossoms into a hilarious attention seeking show-off that we can’t help be enthralled by.

Tom builds a fascinating on-stage world; the rules of this place are drip fed to us. What is expected of us increases rapidly as the show progresses but the learning curve is gentle. He pushes our tolerances with his party pieces, taunts us during his charmingly inept magic tricks and boldly challenges us to games. The odds are clearly stacked in his favour and he tries our patience most of the time which is oddly fascinating rather than annoying. Even when the repetition of an action threatens to become tiresome we are all dying to find out where it is leading to and the pay off is regularly impressive. When he leaves a small gap in the rules for us to exploit we see this character for what he truly is; a spoilt brat who always gets his way, portrayed with comically overplayed seething rage.

Tom plays the audience like meat puppets but in such a delightful way that it is impossible not to bend to his will. His coercing of the audience is brilliant using gestures that are clear enough for us to decipher what is required of us but vague enough that we feel a sense of accomplishment in working out this secret language. A reward system of either the delivery of a punchline on a certain trigger or his visible delight in our success makes you wonder whether he has previously had a career in dog training.

In amongst all this crowd manipulation is some downright amazing stagecraft that keeps the audience in hysterics. He manages to make the most mundane concepts into hilarious works of art and expertly plays the fool for our entertainment. Tom has been to Gaulier and from this performance you can tell that he has learnt some impressive tricks.

With a Best Newcomer nomination he is guaranteed to be playing to packed rooms so rush to see this awesome show before it’s too late.

Tom Walker’s Beep Boop is on at The Tuxedo Cat