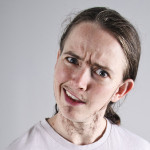 You might have seen Zoe Coombs Marr’s Dave before. His self-titled stand-up show has been touring for the last couple of years, in which he’s been doing good ol’ blokey jokes about the battle between the sexes. Unfortunately, his style of humour has come under fire from some of the more “feminist” among us, so this year Dave’s responding to criticism from the PC police and is trying his hand at some Gaulier-style clowning.

Coombs Marr’s Dave is every hacky stand-up you’ve seen at an open mic night. His jokes are awful and he displays a stunning lack of self-awareness. But there is a vulnerability to Dave. Coombs Marr has done an excellent job of humanising her character, showing us that he’s not such a bad guy – he just finds change a little hard to take. Watching Dave have a go at silent clowning is excruciating and hilarious. He mugs at the audience while a twee soundtrack plays, never managing anything more than a hollow caricature of the style.

As good as Coombs Marr has been at portraying Dave in the past, she takes it up a notch in Trigger Warning. The show is cleverly layered, providing its own commentary on Coombs Marr’s choices in playing Dave and the place of queer politics and feminist politics in comedy. The relationship between Coombs Marr and Dave is played intelligently, the lines of reality blurred and shifted into an increasingly bizarre maelstrom of confusion. It’s fascinating and funny at the same time. For all its meta-ness, Trigger Warning never feels overwrought or inaccessible. The chaos and gore and silliness balances it out perfectly.

Trigger Warning is an incredible piece of comedy and Coombs Marr’s Barry and Gibbo wins are very well-deserved. It’s very much sold out now, so keep an eye out for whatever Coombs Marr does next.