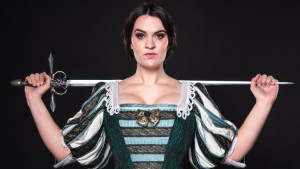 Most of us have a shitty romance or breakup story, and Gillian English has put hers into lists for us. She is questioning why she has on several occasions been called a “Bitter Shrew”. She goes about this by loudly naming and shaming men who’ve behaved badly towards her and while trying to shift blame fails somewhat to prove her point but is entertaining none the less.

This is an autobiographical festival show made up of the stories of Gillian’s life that all relate to sex. This is not about love, though it does get the odd look in, it is about sex. Gillian is fierce and fearless. She is not shy of sharing intimate details of her varied sex life as she describes losing her virtue, one night stands and Buzzfeed-style lists the 5 worst ways a man has dumped her and more briefly her worst Tinder experiences. Things get fairly graphic as seems to be the current fashion in comedy but Gillian manages to carry it off with her larger than life personality and her ability to keep the laughs flowing throughout.

Gillian clearly has a lot of stage experience, she’s brimming with confidence as an entertaining storyteller and has a good rhythm and tone to her voice. At times, I could sense some influence from Samantha Bee when she got on the feminist pep talk podium. Not a bad influence to have as a strong feminist comedian. There is one hint of vulnerability when she admits briefly she doesn’t feel traditionally pretty and there are some times when she shows some negative sides to her personality like putting a stage costume ahead of the life of a man she loves who is having a heart attack which she recognises is a really low act and something she’d not do again. But she loses the audience’s sympathy somewhat as she fails to look deeply in the mirror or even to explore what the term Bitter Shrew means and whether, even comedically there might be a kernel of truth.

Gillian English is a Bitter Shrew could be a great girls night out, especially if you are in the mood to share a girl power vibe and hear about how annoying men can be in the world of romance; well…hook-ups, one night stands and potential relationships. There are certainly a lot of laughs here, but in a Festival brimming with autobiographical shows this one is a bit like her one night stands, fun and interesting at the time, but not one that will live with you in the long term.