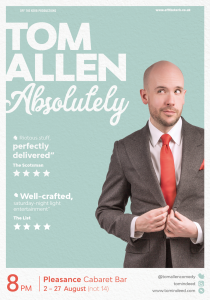 In the past I’ve enjoyed Tom Allen as part of a group show and as a guest on The Great British Bakeoff an Extra Slice, so I thought I must check out one of his full festival shows. It was very much as I’d expected; very slick, very mainstream and very funny.

It is truly lovely to be greeted by Tom at the door while Liza sings Cabaret over the speakers, in case you were in any doubt as to what you were in for. This helps set up a chummy atmosphere that is extended into the traditional ‘getting to know everyone in the front row with backhanded insults’ as originally perfected by Julian Clary. Tom’s style is very different however, this is pure standup and he talks so fast you can feel exhausted, especially if you are trying to laugh at the jokes as they wizz by.

Absolutely is made up of several slabs of storytelling, bookended by two types of party. He begins in his childhood with the children’s party and finally, always the outsider, as the token gay at a Hen’s party. Tom points out the exhausting hideousness for all involved. In between Tom shares his trauma and joy in recently finally getting his drivers licence including that first terrifying time he had to go on a freeway, apparently, you’re not allowed to get on one as a Learner here in the UK!

Tom dipped his toes into a bit of politics, but only in the shallows and not for too long. He ticked off the topics of Brexit, refugees, Trump and had a nice dig at the privileged Baby boomers along the way. It’s strange for me to see a Festival show by a gay comedian who doesn’t mention same-sex marriage… Oh. Yes. That’s right, they’ve won that battle in the UK.

Tom Allen has been performing standup for twelve years, so he knows how to entertain an audience with well honed and hilarious stories. A polished Festival show you could take your mum to.

Absolutely is on at Pleasance Courtyard until August 27