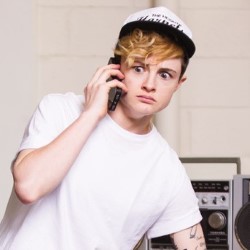 This show is a corker! From the first moment that Demi, in the guise of Gavin, enters the stage we are treated to a whirlwind hour of props, sketches and general chaos.

Based loosely on the story of a middle aged man trapped in his basement, he’s forced to answer questions for a phone survey and suffers a number of hallucinations. There are songs and dances (including a bit of strobe lighting), some dubious drawings (one of which is available as a postcard at the end of the show), a sidekick in the form of one of the ladies from the show Double Denim and a main actor who performs a well scripted hour. It’s not at all highbrow comedy and had the audience in stitches.

This is a show that won’t disappoint.

Look what you made me do is on at Underbelly, Cowgate until August 27