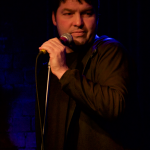 By his own account, Sean Bedlam has made a ballsy move in calling his Fringe show Death To America and from the outset he wonders what kind of audience it will attract. Will they be left wing extremists hoping for an impassioned rant against Trump? If his extremely playful poster featuring lollies, emojis and a cheeky smile is anything to go by, he is more likely to attract those wanting a good laugh above all else.

Bedlam presents the world seen from his self-professed semi-juvenile view. Some stories about his experiences visiting the USA fit nicely with the title while other jokes give us an inkling about his views on politics (including a scatological joke about Trump). Other times he presents wonderfully silly observations on various things that tickle his fancy.

Bedlam’s delivery style is fairly ramshackle. There are huge pauses where you can see the gears turning in his head as he structures the next set of ideas and he often expresses his internal monologue about how things are going. For all I know the pauses may be for dramatic purposes and the babbling could be clever stream of consciousness, but could equally be dismissed as start of season nerves. He certainly has a style that some will find endearing but will be frustrating to others.

Delivery aside, this is still a work in progress at the moment as he had way more material than his slot allowed. Working frequent comments about previous audience reactions into some of the jokes got him bogged down in detail which compounded his time management issues. His notes seemed to be a massive tome so this mountain of new gear still requires some work to get it across efficiently.

Efficiency doesn’t seem to be a word you apply to Bedlam with the journey often being more important than the destination. He stated that he could talk to us for another hour and I’m sure everyone in the room would have loved it. His boisterous and wacky persona has the crowd glued to his every word, eager to see where he will lead us. More often than not, to hilarity.