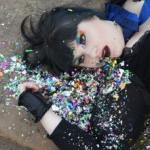 The strangely foreboding presence of a small green metronome on the stage was enough evidence for me to know that this Lisa-Skye was going to be good fun to watch. I was not disappointed.

With a rather theatrical start, moving up through the audience, waxing poetic, she proceeded to tell us of her perplexity and struggle with what became a starting theme to the show; turning 30. Getting married, fun things that are no longer available and the pursuit of women (or the inability thereof) stem from here. Interspersed amongst the spoken sections are some fantastic little poems (accompanied by the above mentioned metronome) which she quite rightly resisted the temptation to drag out or overdo. There are some quirky little animation and cartoons to enhance and emphasise some of the dialogue, but again, not so much as to detract from the star of the show, as has been done by lesser comics. There really is a good balance of her different styles of material throughout.

It must be said that the content of this show is not exactly light. Sexuality, some very black humour, and other topics (while hilarious) that are not particularly well-suited for the faint of heart.

Without giving anything away, there is a short piece of film towards the end of the show that shows just exactly how genuine she is. While obviously it is common for comedians to exaggerate their personalities for comedic purposes, or to create a particular persona, Lisa appears, if anything, to hold back just a little. If I had just one criticism (and I do) it would be that despite some great moments of comedic timing (and of course, that ever-present metronome) there were also some awkward pauses in between sections. Pauses that did tend to suck some of the energy from the room. Fortunately these were few and far between, and the vast majority of the show was tight and well done.

A fantastic, genuine performance from someone I really hope to see perform again soon.

Lisa-Skye’s Ladyboner is on at The John Curtain Hotel, (opposite Trades Hall in Lygon St.)