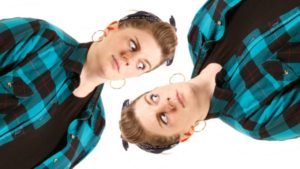 Between a Bok and a Hard Place, could easily fall into the trap of becoming a textbook, meta how-to guide for creating a Comedy Festival show. What Lauren Bok delivers, however, is an hour of energetic comedy that mocks the ever exhausting business of creating art for commerce.

Shows that poke fun at the mechanics of creativity or err on the line of the self referential show about making a show risks isolating an audience, but Bok’s child like nature and charm, and some initially awkward, but ultimately satisfying crowd work keeps us included. Bok’s boldness to fold crowd work in throughout the show keeps us warmed to her for the duration – even if it takes a few members of the audience a long pause and a bit of dead air to get on board with admitting they want her to sleep with them.

Bok’s irreverence for press kits, creating the perfect comedy poster, or the business mechanics of show business as a whole keeps us engaged while her overt physicality reminds us of a child being told to eat her vegetables – that is, she doesn’t want to do it, so she might as well find a way to make it palatable. The joy in this show is found in Bok’s success hacks, such as her trick for blurb writing, and her well handled verbal setups that are more often than not paid off with hilarious physical comedy.

Bok herself, resplendent in her bare feet and oversized KISS T-shirt gives the vibe of an eight year old who has sat her closest family down in the lounge room armed with a box of her toys and her portable boom-box in order to put on a show she’d made up in her back yard an hour before. Her delivery is that of someone who clearly loves to be on stage: gleefully commanding, bold, and fun. It’s a relief to attend a meta show where the comic displays a refreshing enthusiasm that could easily have been lost after a facing the unenviable struggles of stand up comedy.

The moments where Bok spoke about day to day life were also well handled: from getting lost on the way to her venue, relatable hair fiasco’s to the faux humility of the fashion industry, Bok’s joyful use of character to pay these insights off is cheeky and silly. With a precise shift of pace and mood toward the end, Bok lets us in on why she bothers to put herself through the rigmarole of creating a show in the first place – which is not to say she doesn’t still handle this with some careful and subtle comedy.

A well crafted show by an affable, smart and silly comic – If you’re a comedy nerd looking to gaze behind the curtain and throw some props around, this one’s for you.

Bok and a Hard Place is on at The Bellville at 7:15pm from 27th of March – 8th of April. Tickets at https://www.comedyfestival.com.au/2018/shows/lauren-bok-between-a-bok-and-a-hard-place