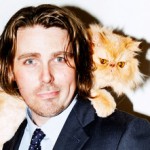 Lets get this straight upfront, this is a show for cat people. If you hate cats, this is not the show for you. The title should give you a clue and once you’re in the room a screen showing 50 pics of an orange grumpy looking Persian while Tom Jones croons ‘What’s New Pussycat” should ring some really loud alarm bells. This is not an ‘Icanhascheezburger.com’ kind of cutesy show, thank god. I mean, really, if cats could use computers they would be able to spell and have good grammar. This is a story about Steele’s relationship with cats and especially his grumpy looking marmalade Persian named Jerry.

The idea for this show was spawned by the fact that Steele included his cat Jerry in his twitter avatar and noticed there was more interest in Jerry than in himself. This led to Jerry getting his own twitter @JerryThePersian which is not at all surprising considering the proven success of cats on the internet. The Cat’s Meow is all about how successful cats are, especially in comparison to ape descendent life forms. Steele has a list of topics stuck to the wall behind him of things that Cats are better at than humans, such as Fitness, Honesty, Happiness and Intelligence. He covers them all, some more successfully than others, with funny anecdotes about cats being smart and people being not so smart.

Steele is an anecdotal comedian, it’s not a grand biographical story show and his experience as a regular in the clubs and pubs of Melbourne is clear from his confidence and ability to get laughs. Some of his stories are crackers and most of them actually stuck to the topic of the show (which isn’t always the case with even the best of comedians) but there was one long personal tale that made me wish the rest of the show had been a bit more of the same, but then I’m a fan of a story show. His account of Chewy the cat and how Jerry came into his life was funny and moving and will stay with you long after seeing the show.

From the get go, Steele reminds us that cat lovers are often teased and looked down upon and I can’t help but be amused that he rarely speaks of his own emotional attachment. He tends to put the blame on his girlfriend for his cat owning, but there is no doubt of his affection. Steele is a warm, friendly comedian and this is the best I’ve ever seen him. This would be a great date show for cat lovers, it is a sweet and funny show.

Steel Saunders is performing The Cat’s Meow upstairs at Spleen