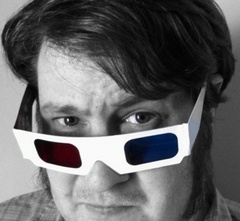 Michael Williams (aka That Guy With The Easel) based his latest show around the loose theme of “mild spectacular” and, much like Michael’s previous work, it revelled in the wackiness associated with the mundane. Add lots of inventive, hand crafted visual aides and you essentially have what Michael is all about; a guy appearing as if he’s making it all up as he goes along, but the hours of work put into it are clearly on display.

There was a faux laziness running through this performance which was contrasted by brief moments of single-minded dedication to a single task. These extremes were the source of the majority of the humour with some self deprecation thrown in for good measure. Plenty of half-arsed pop culture references made the audience feel more knowledgeable than our hero so that we could laugh at his “ineptness”.

Having only seen Michael perform short stand up spots, I was impressed with the inclusion of video work alongside the cards on the easel. Displaying a similar art style to his drawn pieces, we saw animations, drawings, still photos and filmed segments. The screen was also used for the promised 3D content that ran from the gimmicky to the pointless to the impressive.

There were also some audio components which Michael could interactive with as well as a show stopper of a song. This big production number of promised “stupidest thing you will see at the festival” was set up earlier in the show but still came as a surprise when revealed.

This was a rather ramshackle operation with Michael acting as his own tech. It tended to hamper the flow of the performance and leave him on stage in the dark as he provided commentary to the video segments. Was this an attempt at emphasising a reclusive persona by hiding in the shadows, or simply a case of not knowing how to control the lighting? Some may see this as adding to the “low tech” aesthetics of the material while others will view it as poor production values.

If you are able to set your expectations at a reasonably low level and allow yourself to be swept away with Michael’s lo-fi aesthetics you will have a fun time. There is plenty of silliness and absurdity to bring plenty of laughs and smiles.

Michael Williams’ Mild Spectacular (in 3D) is on at Softbelly