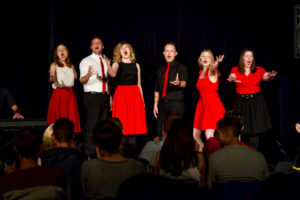 Impromptunes is a delightful show that features a brand new improvised musical each night. The team’s musical and improvisational skills are on full display, as they navigate through the story inspired by the audience’s suggestion of a title.

On this night the suggested title is Commonwealth Games, and the team plays with themes of sacrifice, pressure, and relationships. Instead of utilising the underdog trope the focus ends up being on family relationships and acceptance, hitting the emotional beats of the show with precision. The juxtaposition between these emotional moments and the numerous comedic ones work well, and the performers alternate between the two to accommodate the story.

It is terrifying to watch them perform without the safety net of a script, or pre-written songs, but the performers make this work through unfaltering support for the other performers. They support each other’s songs by repeating lines of the chorus, harmonising, synchronising dance moves, and using more techniques recognised in traditional musicals. The effect of this is tantalising, and the audience responds well to the combination of these complementary moves.

Although the coordination is brilliant to watch, there is definitely joy in seeing when things don’t go perfectly. On the rare occasion that a line is missed or misheard by one member (and noticed by the audience), this also resulted in laughter. There is something thrilling about all the things that can go pear-shaped when improvising, and the audience delights in both the stellar successes of the performers, and well as the minor slip ups.

Overall Impromptunes is a charming show that showcases the improvisational and musical talents of the performers. Their ability to create relatable characters and catchy songs keeps the audience invested and engaged for the entire show in a way that is absolutely engrossing.

Impromptunes is on at the Trades Hall – Music Room https://www.comedyfestival.com.au/2018/shows/the-completely-improvised-musical