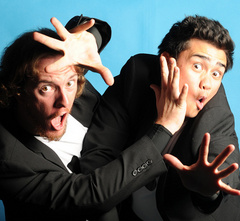 Set at the end of last year’s MICF, Shrub and Wearnie inherit a house from their “Uncle Lucifer” and soon discover that not everything is as it seems. So begins the Underlads latest crazy adventure.

Every horror movie cliché imaginable was thrown into this show. It got to the point that identifying all the references sometimes took precedence over laughing at the jokes. There was lots of witty wordplay, hilarious verbal and physical conflict, and plenty of absurd ideas running throughout. The plot twisted and turned all over the place but still remained coherent enough to follow.

The references to ghost sex in the program blurb made it clear that they would delve into some risqué and disturbing concepts, making it not one for sensitive souls. This was emphasised with some sexually graphic visuals and crude song parodies that simultaneously titillated and grossed out. Add to this the splatter elements of horror and a homoerotic subtext, and you get a show that traded on sophomoric humour but managed to do so in inventive ways.

A massive amount of work has gone into this show. From the clever props to the scarily accurate puppet replicants, to the extensive video footage there was boundless creativity on display. A semi transparent screen allowed the guys to interact with video both on stage and behind as shadows. This allowed some additional characters (all played by the duo) to be efficiently incorporated into the story to provide some relief from the boys running about the stage shouting at one another.

Their acting chops got a workout as the on screen actions required perfect timing to pull off the visual jokes. Both performers were on the go from start to finish as plenty of colour and movement was required to sell this kind of broad humour and slapstick. Things denigrated into constant cartoon violence as the show reached its climax, but their enthusiasm was so infectious that it was impossible not to be swept up.

They each cranked up their characters to eleven but still managed to clearly maintain their roles in the classic format of the double act; Wearnie as the dimwit and Shrub as the practical one. There were fascinating moments of deconstruction that appeared to be off the cuff, but soon were revealed to be as tightly scripted as the rest of the performance.

This show certainly won’t be to everyone’s taste, but if the prospect of seeing a pair of flesh and blood cartoon characters in an ejaculate and blood soaked (figuratively not literally) romp sounds appealing, this is worth checking out.