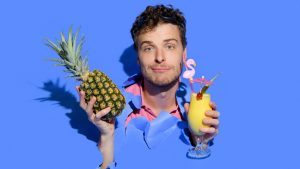 Last time we last saw Oliver Coleman he was working as a duo with Emil Freund in Uncompetent. It was a really enjoyable show and this is no different, except that Oliver proves that he can pull off a fabulous wacky sketch show as a solo artist.

Oliver welcomes us to the space in character as a loud and overbearing pool man with a big fake moustache called Mr Squires. It certainly gives you the vibe of what you are in for. He begins by outlining the rules. There are many and they are very silly. Poolside is full of really interesting funny ideas, big props, gags and one-liners, and he doesn’t stray from the poolside theme too often. Though we did find ourselves in a New York comedy club at one point. But it’s worth it. Oliver brilliantly plays a tough old school New York comic as well as his wife, who cleverly has the same style New York accent. It’s a bravura performance of a character cameo and well worth the segue.

Oliver Coleman with his winning style and excellent comic physicality reminded me of Duff crossed with Francis Greenslade doing a Sam Simmons style show. It’s mostly very loud and in your face, with the occasional quieter moment. He’s not too confronting as to be unbearable though. In his shorts he’s like a big hyper kid who’s had too much red cordial, he’s having fun and really wants us to join in. He never jumps into bullying the audience, but certainly plays around the edges. He makes an effort to be kind to his 2 audience helpmates which keeps the audience on side.

Poolside is jam-packed with laughs and doesn’t let up. There are no dull spots. The delightful centrepiece of Poolside revolves around him stressing over latecomers filling the few empty seats. I wonder how he will manage that when this excellent show starts selling out? He better have a backup plan because those seats are going to be crammed in with punters once word gets around.

Oliver Coleman Poolside is on at Tasma Terrace til Apr 7