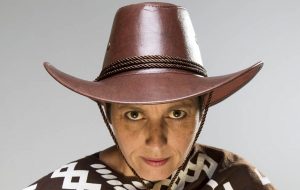 It’s been quite a while since I’ve last seen Tanya Losanno on a Melbourne stage. Since then, family has been consuming her life and this wonderfully sweet set of stories documents the trials and tribulations of caring for elderly parents in her hometown of Canberra.

The spaghetti western theme loomed large in this show (you will be humming Morrocone’s theme for days afterwards), drawing connections between the characters in those films with her and her parents, and portraying the many misadventures as showdowns. She regularly poked fun at Mum and Dad’s peculiar habits and all the crazy situations they caused. A lot of Tanya’s jokes revolved around their Italian heritage but it was a gentle, loving ribbing of their eccentricities and the exasperating gap between the generations, rather than scoffing at the behaviours from the old country.

The show gradually built a vivid picture of her parents with amusing memories from Tanya’s childhood revealing more about how her view of them had changed over time. She loved a callback and frequently returned to several Italian motifs during the hour.

Tanya was the same convivial performer that I remember and she had the audience glued to every word. It was quite an animated performance when some of the tales were broken up with mimes to illustrate the scene she was describing. Some were merely a gun-slinger grimace while others were full on slapstick affairs and her facial expressions were a joy to behold.

The Good, The Bad and The Elderly was a charmingly amusing show with broad appeal and some damn fine comedic storytelling. It’s certainly one to take your mum to (if she can manage the stairs up to the venue).

The Good, The Bad and the Elderly is on at The Coopers Malthouse until April 21
https://www.comedyfestival.com.au/2019/shows/tanya-losanno