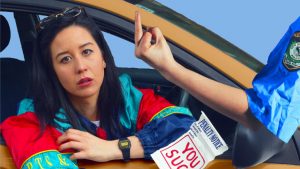 Nina Oyama might be a familiar face. Maybe you’ve seen her on Utopia, or SBS a few years back or Tom Ballard’s Tonightly. Or, more likely, you saw her throw up on a mass scale at a pub in rural New South Wales.

Oyama hails from the city of Bathurst. On its tourism website, Bathurst is said to have “rich heritage, museums, and a thriving arts scene”. This isn’t the immediate impression you get from listening to Oyama’s recollection of the region: where K-Marts are considered an upper crust institution, where there’s nothing to do but drink yourself blind, and also apparently pick up innumerable road fines.

The show is framed around Oyama’s unusual aptitude for picking up fines for speeding, driving without a valid licence, and not displaying her P-plates – all of which has to disgrace her father, who’s a well-known figure in taxi driver circles. It’s doubtful that she was pleased about these at the time, but her recklessness has provided Oyama with a wealth of amusing jokes.

Unlike plenty of other comics I can think of, Oyama has a self-consciousness that serves her comedy well. Instead of regurgitating trite and tired lines about house prices, the price of avocados, or the incompetency of our politicians, her set frequently mocks them intelligently. She’s not afraid of self-deprecation either, but again this is adopted in a genuine, honest way – maximising its interest to us and its comedic value.

All performances are embellished to some degree, but there’s a strong sense in which we’re getting to know Oyama over the duration of her show. She’s not just spitting out randomly funny jokes, but material that clearly has some personal resonance for her. And this makes her performance all the more engaging.

At 25 years of age, and presumably not wanting to return to Bathurst anytime soon, it seems that Oyama has more than a few good years left. Effervescent, likeable, and self-aware, she’s got all the tools to flourish in Australia’s comedy ecosystem. The years of her getting by as a “human possum” – stealing fruit off trees in Brunswick – are over, you’d have to think.

Nina Oyama: Needs a Lift is showing at the Forum until 21 Apr