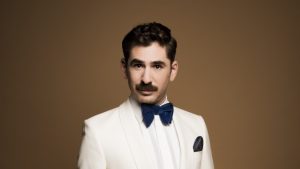 One word: wow. I had to watch a YouTube video of an interview to put to rest my suspicions that Glanc was an utter weirdo. It turns out he is actually capable of normal behaviour. In the interview I watched, you wouldn’t have batted an eyelid at his responses to his interviewer. They were modest, well-articulated, measured. Because, in his show, his conduct his quite out of this world; more bizarre and questionable, arguably, than Barry Humphrey’s famous turn as Dame Edna. Playing a version of himself, Glanc sings (which he isn’t half bad at), dances, and urinates – with a fake penis(es) – through the show, which focuses on his, let’s say, interesting relationship with his mother.

Glanc has been at this for a few years now, and his bizarro approach to comedy hasn’t dimmed. You have to give it to him – it definitely takes a lot of self-assurance to pull off something as audacious as what he does with Glance You For Having Me. His work isn’t going to be up everyone’s alley, but for those wanting to experience something beyond the standard stand-up routine, Glanc might just be what the doctor ordered.

Glanc doesn’t just thrive off funny, well-thought out lines, but also the wicked tension his awkward, unflinching brand of comedy elicits. Many of the laughs he gets are instantaneous; others land once the unsettling nature of the moment is fully appreciated.

The show starts off with a bang, followed thereafter by a steady flow of material, wrapped up by a truly disconcerting yet hilarious ending. I’m not entirely sure, even now, if what I saw was part of the show. If it wasn’t, then it shows Glanc’s kinetic ability for adaptation. If it was, then he’s done a great job of being so outrageous that everyone left stunned, and unsure, of what’d they’d just seen.

Glance You For Having Me is on at the Melbourne Town Hall until April 21
https://www.comedyfestival.com.au/2019/shows/glance-you-for-having-me