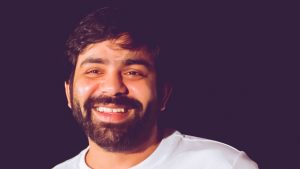 Sumit Anand’s festival blurb contains all the clues you need to determine what kind of performer he is. He regularly kicks the self-deprecation into overdrive and regularly talks of his lack of ambition. It’s a very low energy performance, telling jokes and stories without a lot of colour and movement. This is slacker comedy without all the drug jokes and conspiracy theories.

He dwelt on topics such as his relationship with his parents, holding no hope for humanity, his disrespect for authority and the ignorance of youth. In his stories he didn’t come off well, describing himself as idle and enjoying schadenfreude but he was far from a despicable character. He was a genuine and likable performer and he gave us all a guilty chuckle by recognising our own dark thoughts and indiscretions.

Aside from the odd difference in terminology his material had universal appeal. There was a slight cultural divide that affected the strength of some of the jokes. For example, he joked about India’s patriarchy of only a generation ago which was confronting for a modern Australian audience who were unsure whether they should laugh or not. Perhaps he was a little too subtle in the delivery to assure us it was okay to chuckle at these outdated beliefs?

Overall, he has plenty of interesting and amusing ideas in this hour, however the small Sunday audience threw him a bit. This resulted in him focusing on the quiet punters in an attempt to get bigger responses from them – a bit of an uphill battle. He also constantly referred to the lack of big laughs, even going so far as explaining the odd joke. The sets he has put up online prove that with a large rowdy crowd he is confident in his work and has them rolling in the aisles. Let’s just put it down to an off night.

Nothing About Godzilla is on at The Chinese Museum until April 21
https://www.comedyfestival.com.au/2019/shows/nothing-about-godzilla