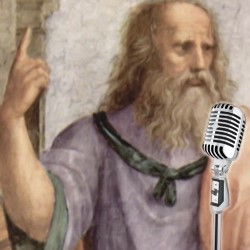 I hadn’t planned to see this show, but they were still queueing as I was walking into the building and I took a chance. Very interesting concept for a festival show. Our host, Charlie Duncan Saffrey, introduces two guests to give a 20 minute talk (hopefully funny) on the theme of the day and the audience are welcome to debate with the guests after they have finished. Today’s theme was “belief” and our two guests, Alex Farrow and Alex Mason, gave interesting talks which we then argued about.

All quite fun and very interesting. I was amused that both guests had decided to wear all black clothing (apart from one pair of red socks) and had their sleeves rolled up to the elbows. They stood in front of a black background with no spotlight so most of the talk was of a disembodied head and two waving forearms. I’m not sure they had even realised this fascinating visual was going on until I pointed it out to them at the end.

There is a list of each day’s theme outside the venue, so you can come prepared to debate on a particular subject. Apparently the Head of the Philosophy Department of the London School of Economics and Political Science is coming up to give one lecture. Given all the turmoil in British politics in recent times this show should provide some, ahem, lively discussion. 😈

There are some laughs to be had, but mostly, Stand-Up Philosophy is recommended for those wishing to stimulate their intellect in the afternoon or looking for a good argument.

Stand-Up Philosophy is on at Laughing Horse @ The Counting House until August 25
https://tickets.edfringe.com/whats-on/stand-up-philosophy-free