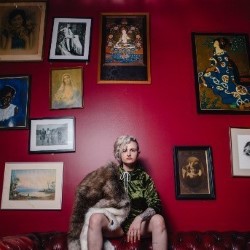 Demi Lardener is a unique voice in the comedy world and more importantly she is genuinely gut-bustingly hilarious. The opening of the show was one of the funniest things I have seen in a long while, and the closing was nearly as whacky.

Unlike previous shows from Demi, we are not confronted with a stage full of props, which are then used throughout her show. This year, Demi has decided to go a little high tech, using a PC and projector, plus some audio, combined with stories from her youth such as a visit to Kangaroo Island, fascinating tidbits and snatches of craziness. There are also some very disturbing drawings by Demi.

My favourite thing about Demi’s shows are the total unpredictability, and the shattering of any boundary with the audience. If you’re of a nervous disposition or don’t like audience participation, you may want to give this one a miss. There is also a bit of swearing, but it is a late night show after all. Demi will get up close and personal, as she crawls into your minds and bends them out of shape. Highly recommended.

Ditch Witch 800 is on at Gilded Balloon Teviot until August 26
https://tickets.edfringe.com/whats-on/demi-lardner-ditch-witch-800