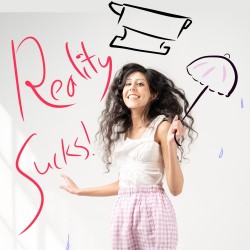 Reality Sucks! is a morning show (11.25am) which runs for a little over half an hour. The venue is pleasantly cool but I’m afraid the comedy from Nav Chima just didn’t work for me.

She talks in a sing-song voice with a slight lilt at the end of each sentence (something us Aussie are often accused of) and speaks in little more than a whisper, never emphasising or pausing for punchlines – lacking the basics of comedic timing and stagecraft. Her stage presence was so slight she could have been replaced by an mannequin with a tape deck. Nav presents a series of absurdist stories which often seem to go nowhere and not bothering to change any of her references from Los Angeles for her UK audience certainly doesn’t help.

I can’t recommend it on the show I saw, but if you’re interested in seeing whether I am wrong (or just need to shelter from the rain before lunch) why not give this free show a try. It’s at Augustines, which is right next to some lovely eateries so you can be dry and fed.

Reality Sucks! is on at Paradise in Augustines until August 24
https://tickets.edfringe.com/whats-on/reality-sucks