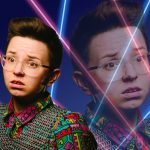 Maddy Weeks has made some really bad decisions. They are not all sword related, but many are; real and metaphorical. On opening night it’s still a bit rough around the edges, but with the support of the audience, Maddy puts together a very entertaining Fringe Solo Debut.

Maddy’s bad choices have made her lose all confidence in her decision-making abilities and thus she constantly asks the audience how they think the show is going and if it is OK for her to do her next bit and so forth. It can get a bit repetitive at times but her cheeky stage presence keeps the audience on side. Maddy, originally from Goulburn and now in Canberra, obviously comes to her debut Melb Fringe show with some experience.

The title, Maddy’s outfit of real chainmail and Morter board and fabulous introduction by “Voice Over Man” got me very pumped up and excited that this was going to be all about Maddy’s love of swords and medieval stuff. I was all ready to recommend this to my gaming friends. But a short way into the show she drops the costume and the title’s theme to go into the more mundane topics of her bad decision making, including relationships and stories about vomiting. Not that there was anything wrong with that, really.

The structure has a little ramshackle feel, it is there if you think about it though and I enjoyed the red herrings of will we or won’t we see a sword. The picture of her 11th birthday party was a highlight and after a lot of teasing it would’ve been nice for her to give us an ending with an enlarged photo or a slide show of her whole sword collection rather than the actual ending that felt a little tacked on.

Maddy is a charming and funny young comedian with a lot of potential and is a great person to spend an hour with. Blade University was loads of fun, we didn’t learn a hell of a lot about swords but we enjoyed learning about Maddy Weeks.

Blade University is on at The Coopers Inn until September 19
https://melbournefringe.com.au/event/blade-university/