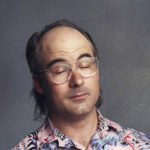 The Stuart Daulman Farewell Reunion Show is like watching your mad uncle pontificate at a family function – that’s meant as a compliment.

Stuart Daulman is clearly a master of his craft. The show is largely straight standup, with seemingly no firm structure and flexible content selection.  He seems deeply relaxed throughout the performance and it feels at times like you’re watching an eccentric uncle hold court at a family BBQ, anecdotes many of which don’t fully materialise and migrate to tangents that deliver more tangents and occasionally bringing it all back together with a musical interlude.

Daulman achieves that wonderfully enigmatic stand-up trick of holding the room’s attention and making everyone laugh without (on the surface) having to do very much. If one were to look at the script for the show, there isn’t masses of content and certainly not hundreds of jokes, but with his delivery style Daulman manages to squeeze every bit of funny out of even the most banal detail. Getting a coffee, catching the tram, all of which become hilarious stories in Daulman’s hands. The written jokes almost becoming secondary to the style and delivery.

Words like “rambling delivery” and “not much content” might seem like this is a negative review, that’s not the intent at all and couldn’t be further from the truth. Daulman holds the audience in the palm of his hand and has everyone hanging of his every word. His set pieces of lip-synching help to keep the pace of the show and mix things up.

I’d only seen one of Stuart Daulman’s previous shows, and from memory it was a high concept performance involving staging his own funeral and he alludes in tonight’s show to it being unusual for him to be doing stand-up without lots of props and masks. It’s refreshing to see such an established indie performer to take a step back and strip back the performance to the basics.