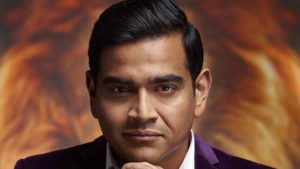 If Dilruk Jayasinha was a cricketer or footballer, you’d be saying that he has hit some pretty good form recently. In 2018, he received a Logie for Most Popular New Talent, has starred on Utopia, and did a stand-up special for Amazon Prime during the early stages of the coronavirus pandemic. After months out of the game, Jayasinha – like Steve Smith in the 2019 Ashes Series – returned to the playing field in style with Victorious Lion, delivering an engrossing, amusing, and consistently excellent performance.

Despite a slow start to the show, Jayasinha grew quickly into his set. Immediately, it is clear that he has his own unique approach to the art of comedy that is especially upbeat. Jayasinha is grateful for the mere fact that the show could go ahead, in a ‘comedy festival that wasn’t supposed to happen’. He also refuses to berate people that come in late, and his exchanges with the crowd are entirely good-natured. Not once does he pressure anyone to reveal personal information for the benefit of a few laughs. This is something of a rarity among comedians, and Jayasinha can be proud of the respect he shows his fans.

Though, that doesn’t mean Jayasinha’s comedy is ‘clean’ in the Seinfeldian sense. In fact, it’s not clean or family-friendly at all, even if his personality is. Much of the show – including its best parts of it – deals with Jayasinha’s longstanding status as a single man, and with that comes a multitude of jokes of a personal nature. Every couple of minutes one of his stories, lines or jokes would provoke uproarious laughter – a strike-rate most comedians would be incredibly happy with. Interweaved with these jokes is a narrative about Jayasinha’s life: what it’s like to live overseas from one’s family, his drive to become a comedian, and how he coped with the months-long lockdowns of 2020.

Jayasinha has already cultivated a core of fans through his television appearances, and, most certainly, by delivering high-quality stand-up performances. Victorious Lion fits that latter category, and might just well be one of the best shows in the 2021 Melbourne International Comedy Festival. If he continues to churn out such hilarious and entertaining sets, then Jayasinha will find himself in the upper echelons of Australian comedy. It may only be a matter of time.

Victorious Lion is showing at the Melbourne Town Hall until 18 April. Tickets are available here: