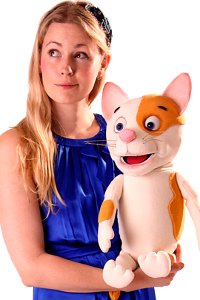 While other ventriloquists use their puppets/dummies to express taboo thoughts and show off parlour tricks, Sarah Jones uses her Fringe debut to explore the theme of being an awkward social outcast in a sweet show that demonstrates her vocal dexterity.

We are introduced to Kitten, a cat who has grown to become a bitter feline, her Uncle Bruce who tries to improve the act as only a well meaning relative can, in addition to some clever puppets improvised from household items. All the characters are brought to life beautifully and their unflinching denial of puppetdom allows plenty of your standard smart alec remarks where the audience can laugh knowingly at the artificiality of the dialogue.

A number of the standard tricks are employed to display her talents. Singing a fast paced duet impresses all. The execution of rapid banter and comical misunderstandings are spot on as these are the basis of making this kind of act work. The human dummy routine is made her own by basing it on her awkwardness with the opposite sex; a welcome change from the “let’s humiliate the volunteer” shtick you get from others.

Each segment is preceded by a short vignette in which Jones portrays a pair of bitchy girls from her peer group critiquing the show. Although she seems to be playing it for laughs with the exaggerated voices and mannerisms, as well as some implied ignorance, these scenes are tragic rather than humorous.

Jones lays on the self deprecation thickly with a trowel. Every other line criticises her eccentricities and talents creating a show containing plenty of pathos. Although the lines are filled with cheeky humour and funny self referential quips, it has a strong bitter-sweet subtext. She always maintains her lower status even when the puppet shield allows her the opportunity to be forceful. Thankfully her sweet demeanour keeps us on side and cheering for her underdog. Breaking up the performance with silly throwaway jokes and some mild flirtation with punters also helps by adding some lightness.

This is an enjoyable and gentle show that doesn’t set out to offend, making it suitable for all ages. No one is in any danger being confronted by a renegade puppet in this performance.

For details of the Edinburgh run of this show visit http://www.edfringe.com/whats-on/comedy/sarah-jones-does-not-play-well-with-others