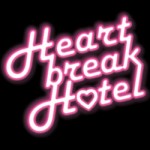 Have you had a bad breakup, still nursing a broken heart, feel you’ve been plumb done wrong, been dumped and you’re still down in them? Well, book yourself a room at the Heartbreak Hotel where Lizzie (Mace) and Juliette (Burton) will attend to your every emotional need and send you back out into the world a whole person.

Mace and Burton (as their name tags prominently displayed on their chests remind us) have experienced heartbreak in many forms down the years and they are here to help us avoid the pitfalls. There are guests who tell us about their breakups and how they overcame the pain. The show started with introductions and a quick warm-up before the first guest, Anil Desai, came on and told us a tale of his first love and the wardrobe he smashed when she cheated on him, as well as how he to took her out one more time (a few months later) to properly close his heart to her (saying a proper goodbye and closing the feelings box, not burying her in a peat bog you sickos). He then ruined the good feelings we had by telling us about the girls who want him to have sex while he’s doing an impression of Christian Slater or Jim Carrey! We next played the break-up line game where we were presented with a series of break-up lines and had to choose which of out hosts these were delivered to (the audience beat the guest 9-5).

The second guests for the evening were James and Amy, who are in a show called Dysfunctional. From the stories they told (he picks up girls on the Night Bus and she gets over break-ups with alcohol, cock and anger), their show could be a top demented night out. Amy’s heartbreak story was a little strange as she had fallen in love with a sky-diver who later moved to Australia and died in a plane crash.Surely a sky-diver should be best suited to getting out of the plane?

After this we had a sing-a-long to a break-up song, some healing advice and a plea to be more tolerant to those we love. There is also a special break-up book which has advice from all of the guests that have been on the show (including Daniel Kitson, Shappi Khorsandi, Phil Jupitus, Susan Calman, The Boy With Tape on his face and many other festival favourites). The advice book is being auctioned off after the show’s run finishes with the proceeds going to the charity Mind, with the reasons explained in the show.

This was a delightful show, with the two hosts bringing a warm and welcoming atmosphere into the small room, the stories of pain and heartache told by the hosts and their guests have the audience feeling like a group therapy session (in a good way). I would certainly be booking a room after my next heartbreak. It’s part of the free fringe and is one of the loveliest shows out there. they have another show called Rom Com con (13.15 at Canons’ Gait), which I might have to catch as well.

Heartbreak Hotel is on at Buff’s Club.
http://www.edfringe.com/whats-on/comedy/mace-and-burton-heartbreak-hotel