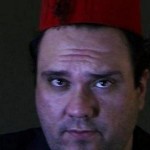 Writing reviews can be hard. You go and see a show and that’s all well and good, but then you have to somehow make words on a page about it and it’s all an awful lot of effort. Luckily, Ben Pobjie has made life easy for the critics among us by providing a short leaflet of suggested things to write when reviewing ‘Let’s Put On A Show’. And so… Ben Pobjie’s ‘Let’s Put On A Show’ is “a lot like having balloon animals forced down your throat by a Nazi.” I can say without doubt that “I spent the whole time vomiting on myself”. Wait, no. That won’t do at all. Let me start over.

Ben Pobjie’s ‘Let’s Put On A Show’ is a quick-witted improvisational exploration of comedic performance. Over the course of the hour, Pobjie attempts to uncover exactly what it is we, as an audience, want from a comedy show. He takes us through the essential components of any performance, from hecklers to joke topics, collaborating with the audience to figure out what we would consider to be the perfect show. Scattered throughout are stories about what drew Pobjie to comedy and his ongoing quest for fame.

Be prepared to get involved. This is an interactive show in an intimate venue, so you really don’t have anywhere to hide. Now, the words “audience participation” have been known to strike fear into the heart of many a festival goer – myself among them – but be assured that it is not as terrifying as it may sound. Pobjie works with the crowd to create comedy, as opposed to singling out individuals to be the butt of the joke.

On the night I attended, there were moments where the audience was reticent to participate, but on the whole, they were willing to collaborate, throwing out the topic of “cute animals” as the thing they’d most like to see a show about. Pobjie’s ability to take a topic and run with it is impressive. Cute animals may not be an intuitive source for comedy, but Pobjie managed to take the discussion in a hilarious and somewhat disturbing direction after discovering that a gentleman in the front row had a cat named Barbarella. The more the audience puts into this show, the more you will get back.

‘Let’s Put On A Show’ is great fun. Go along, get involved and you won’t be disappointed. I for one hope to see our chosen production – ‘Barbarella the Cat and the Japanese Slitface Ghost Go Camping’ – at the Comedy Festival next year.