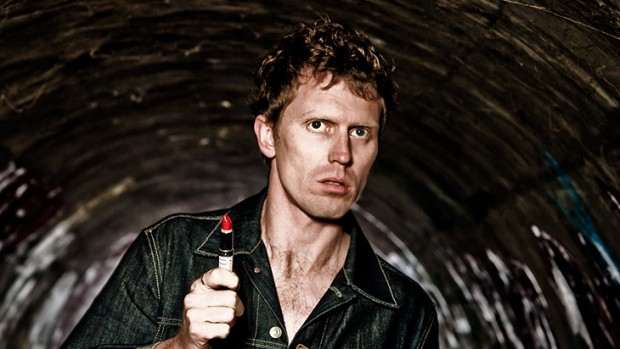 David Quirk has been the critical darling of the festival for several years now and unfortunately I have repeatedly dismissed the hype. For a long time I have seen him plugging away in rooms where he has stood out like dog’s balls amongst the tight fives of others, but his delivery didn’t quite do it for me. In extended storytelling mode however, he is a force to be reckoned with.

In addition to his uncanny ability to keep an audience glued to his words for an hour there are other elements to this performance that add a completely new dimension to his act. A segment of energetic physicality is a dramatic contrast to his usual rather static and reserved stage persona. A solid yet lightweight routine of old is given a considerable reworking to give it detail and gravitas while adding even more laughs.

With his show Shaking Hands With Danger, David takes us on a journey through a five year relationship (complete with a dangerous indiscretion) adding a secondary and equally important story of his relationship with the band Guns’N’Roses. It is a tale in which many can relate to varying degrees but is given the fascinating and humorous dimension of Quirk’s slightly naïve yet blunt world view. He keeps the audience enthralled through every step, and every aside is entwined firmly into the narrative.

David paints vivid pictures by going into excessive but amusing detail and using colourful turns of phrase. His descriptors are highly inventive and sometimes grotesque and confronting. The deliberate phrasing gives the performance a contemplative atmosphere while adding the theatrics of a man struggling to articulate this emotional tale. Add to this some snippets of his infamous dark material and you have an accessible show that is a little challenging.

This is a beautifully constructed and hilarious piece that is sure to garner much more acclaim. Bravo Mr Quirk, Bravo!

David Quirk is on at the Melbourne Town Hall.
http://www.comedyfestival.com.au/2013/season/shows/shaking-hands-with-danger-david-quirk