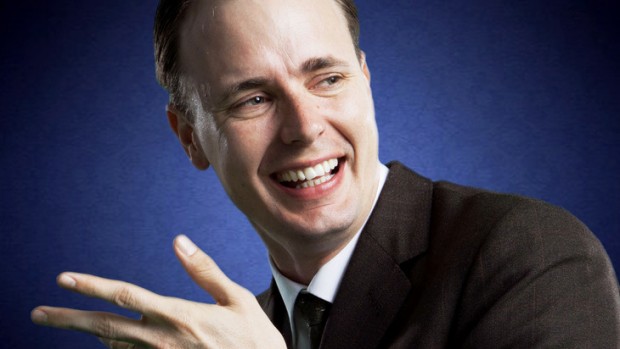 The title Bad Dandy indicates a theme of style over substance (which is exactly what this performance is all about) but there is also the clever contradiction of giving it plenty of depth. Asher Treleven gives the appearance of being preoccupied with telling us all about how great he is and all the things he is capable of, but not actually getting into his “material”. Meanwhile he is critiquing the theatrical conventions of stand up and all that surrounds it with some wonderful routines and fascinating lines.

All the performance elements that he covers are illustrated by example. These are brilliant jokes and routines but are constructed to look like teasers for a show that, as we progress beyond the half hour mark, may not eventuate.
The only routine that clearly resembles “prepared material” comes in the closing moments of the show; a bit that describes the Global Financial Crisis which utilises the audience. It is a wonderful extension of one of the sillier spectacles from his Wild Duck days in 2005.

There is lots of misdirection (ie. dressing his stage with beefcake/cheesecake photographs and telling us that they will be the only thing that we will remember from this show), ridiculously obvious hack techniques (ie. asking us if we understand clearly commonplace references) and numerous, seemingly offhand asides but they all feed into the overall concept. We are drawn into the artifice of “the performance” as he describes audience member tropes and points individuals out for all to see.

Asher carries this all off with his wonderful way with words and lashings of charm. His much lauded physicality provides plenty of colour and movement to give his routines an extra dimension.

This is a performance that caters to one audience on their own level without diminishing the experience for another group. Comedians and comedy nerds will have a ball with all the meta stuff going on. Everyday punters will enjoy the shenanigans of this wonderfully silly man and all his beautiful physicality. Everyone will get their comedic dollars’ worth of entertainment.

Bad Dandy is on at The Victoria Hotel
http://www.comedyfestival.com.au/2013/season/shows/bad-dandy-asher-treleaven