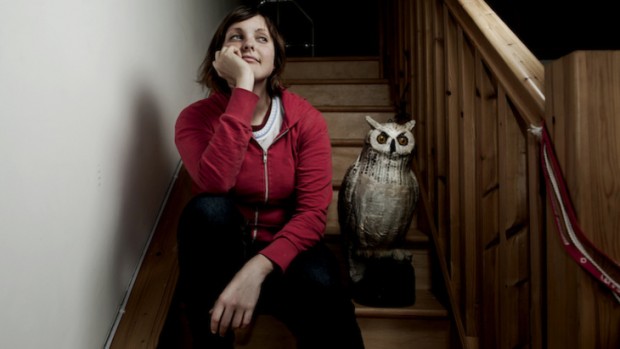 It’s hard not to fall for Josie Long the minute you walk into the Supper Room at Town Hall. As the audience filed in, Long was already on-stage, establishing the “party vibe” for the evening. Alternating between dancing and chatting to the growing crowd, it was clear that she had won over her audience even before the show had even begun.

‘Romance and Adventure’ is the complete package – you get pre-show entertainment, post-show entertainment and an hour of hilarity in between. ‘The show contains both romance and adventure, though perhaps not in the forms you would expect. Long discusses recent upheaval in her life as she approached her 30th birthday. Leaving her long-term relationship and feeling out of place in the posh end of town, Long turned to lists and social justice to try and re-establish order.

Long is wonderfully charismatic and very relatable.  While she may be getting older and discussing more serious subject matter, she has not lost her youthful cheekiness. Her material is quick and clever, her delivery earnest and immensely likeable – as though you are having a one-way conversation with an overexcited friend.

Long’s newfound enthusiasm for (and then weariness of) social justice makes for great material. She perfectly expresses the frustrations of living under an ideology you disagree with and the feeling of powerlessness that comes with it. Her impression of the UK’s conservative government is made all the funnier by the presence of her real passion behind the joke. Social justice could be a tough topic for comedy, but Long strikes a good balance. Though the show is deeply political in parts, you never feel like you are being preached to.

‘Romance and Adventure’ is truly wonderful and well worth checking out.  It’s guaranteed to have you  walk out still chuckling,

Josie Long – Romance and Adventure is showing in the Supper Room at Town Hall until April 21
http://www.comedyfestival.com.au/2013/season/shows/romance-and-adventure-josie-long