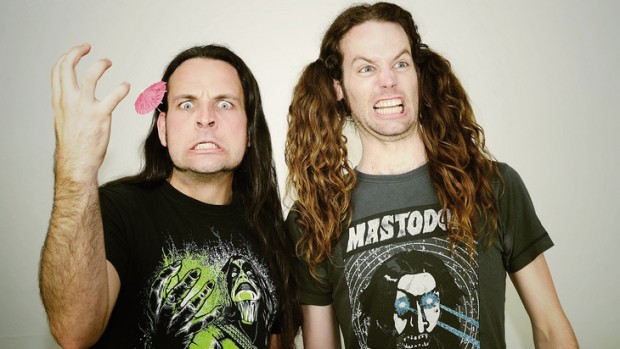 Joining forces over their love of heavy metal music, Mitch Alexander & Jackson Voorhaar (he even sounds like a black metal vocalist!) present a great two hander stand up show. Unlike other heavy metal comedians who skim over their metal material, these guys have made the effort to ensure that they stick to their metal title throughout. This is certain to please the predominately Metal-Head audience this show will attract but is careful not to alienate others.

Mitch gives us material that has the veneer of being exclusive to the metal scene, but underneath it all is a universality that appeals to all. Stories about mating rituals have been covered by every comedian and their dog but setting them in the metal world gives them a wonderful twist. Those familiar with the metal references can chuckle in recognition while others can laugh at how silly it all appears to the outside world. He does some obvious material relating to the hypocrisy afforded to metal but does so with such conviction. Despite putting fear into the souls of delicate punters with examples of his singing Mitch is a charming performer who commands the stage with confidence.

Jackson takes the unhinged loner approach to his stage persona. He has a warped way with words and his main source of humour comes from outrageous comments using creative descriptions to add a sense of the bizarre. It’s not so much using shock for the sake of it but rather the unexpectedness of where he steers things which provides much joy. With his gangly frame he utilises the entirety of the small stage to add plenty of colour and movement with his exaggerated rock moves.

Concluding the show with some audience participation is fun for those game enough to join in but is a little cliché. It doesn’t really end things on a huge laugh, leaving everyone sweaty instead, but it seems to be a suitable substitiute Endorphin release.

This is a brilliant pairing of two different performers to give the audience enough variety while covering the same topic. I raise the horned hand in appreciation.

Satan’s Finest is on at The Horse Bazzar.
http://www.comedyfestival.com.au/2013/season/shows/satan-s-finest-jackson-voorhaar-mitch-alexander