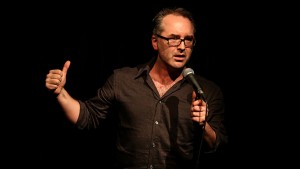 The mood is set with blue lighting and a blue song from Bowie, ‘Sound and Vision’, to place us in the mind set of Justin Hamilton pretty much at the time where his last show The Goodbye Guy left off, a time of change, of feeling a bit wistful and taking time out to reassess his direction. Developed from his more theatrical shows, Justin has found a style that works really well and suits him and his confidence in the audience’s intelligence and its willingness to go with him. There is no preamble, no banter, he’s straight out of the gate, like a primed racehorse in top form.

Johnny Loves Mary 1994 is proof that a year off from the festival can be a good thing and allow an artist to get off the treadmill and have the time to explore life and come back again when the passion returns with something exciting to share. Not that he stopped working. Constantly cranking out several popular podcasts and a blog that diarised every single show he performed last year as well as organising regular seasons of The Shelf and then there was his eye-opening trip to perform for the troops in Afghanistan which was clearly the inspiration for the theme of this year’s show; exploring what it means to ‘be a man’.

Justin is the master of taking his standup routines and weaving them seamlessly into his festival show. He also seems to cram in even more jokes to give audiences maximum comedy value for their bucks. This year he takes his recent standup stories, familiar with die-hard fans, much further, into darker places than he might share with a pub crowd and some take on greater meaning in this larger context. These include helping a woman in trouble in an impromptu attempt to be Batman and why he might not make such a great dad. His tale of an argument at a BBQ becomes the juxtaposition to his war experience. He presents us with two different forms of conflict and confrontation. At the front, in a place of genuine danger he sees and feels how ridiculous his nerdy persona is when placed beside the soldiers, the men ‘carved in granite’ he meets, like ‘Buzz’ and ‘Chook’. At the BBQ he wields his own powerful weapons with great expertise; his words and they find their target. Though proud of his skill he still feels somewhat dubious about its brutality.

With Johnny Loves Mary 1994 Hamilton sets the bar even higher for himself and other Festival performers. He takes the same style used in his more fictional stories of the past and strips away the veneer of fantasy revealing a very personal and accessible festival show about his recent life experiences and observations. Some that are obviously still quite raw, there were a couple of fragile moments where he seemed close to tears. The laughs are never far away though and this is definitely a must-see for comedy fans and a masterclass for other performers. The show finishes as abruptly as it began and couldn’t help but leave me wondering  about the material he chose to perform for the soldiers in Afghanistan, but I can be certain that it was carefully chosen, expertly constructed and brilliantly executed.