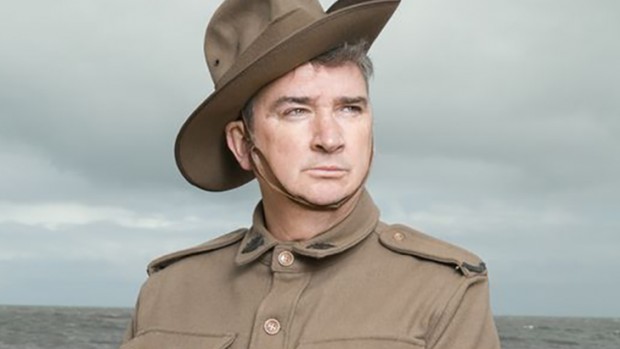 You can always count on Damian Callinan to deliver a brilliant theatrical performance. In The Lost WW1 Diaries of Private Paddy Callinan we saw a humorous account of World War 1 that treated its subject with respect while keeping the laughs coming.

Beginning with an awesome scene of irreverential gallows humour, Damian stepped out of character for a segment of stand-up to give some background. Covering Damian’s obsession with all things military and the story of what brought him to find Paddy Calinan’s diary in a Warrnambool Op Shop, he created some wonderful mythology for the tale that followed.

Then into the diary proper with Paddy’s descriptive monologues setting the scenes to be brought to life via Damian’s acting and character work. Seen through Paddy’s naïve eyes, we met a range of eccentric characters with whom he shared the experience. These included Bluey the Scot always seeing things from his Trade Unionists’ point of view, Stanza budding poet with his raunchy prose and the scrounger who could find the most bizzare items.

This was a beautifully detailed story that managed to keep a foot in the reality of war but give plenty of offbeat humour to keep it jovial. The servicemen were portrayed as lovable scallywags who embodied the iconic Aussie attitude of laughing in extreme circumstances (The Light Horsemen really copped a serve!). We were kept on our toes with many modern references that not only added some welcome silliness but made humorous points about current issues.

It was not purely a boy’s own adventure story. Callinan (Damian through Paddy) provided some poignant moments that brought home the horrors of war. These moments describing the tragic loss of young men brought tears to the eyes of many. Some apt tragedy to balance the comedy.

As with any show from Callinan, it is brilliantly performed with wonderful vocal mimicry, fluid motion and even some dancing. His mime work was spot on and he handled exchanges between multiple characters with ease. He often cheekily broke the fourth wall to poke fun at minor staging shortfalls and his own performance. Another tour de force from Damian Callinan.

The Lost WW1 Diary of Private Paddy Callinan is on at ACMI – Cube until April 20
http://www.comedyfestival.com.au/2014/season/shows/the-lost-ww1-diary-of-private-paddy-callinan-damian-callinan