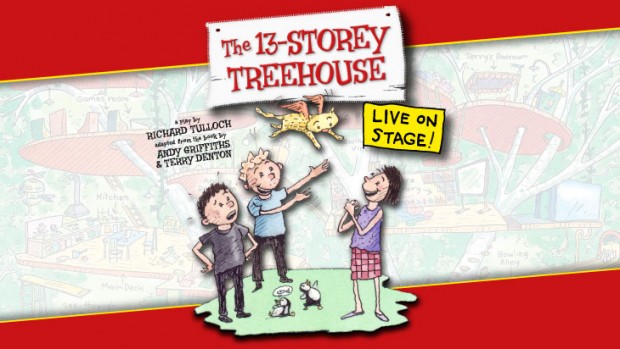 The 13-Storey Treehouse is the first in a hugely successful series for long-time collaborators writer Andy Griffiths and illustrator Terry Denton.  The treehouse is the stuff of dreams; there’s a see-through swimming pool, self-making beds and secret underground laboratory. The books (there’s already a 26-Storey, 39 Storey and the 52-Story is due out in August) are much-loved amongst primary school-aged kids across the country; it makes perfect sense to bring the book to life onstage but how exactly?

The books are an exercise in post-modernism; the story is all about the two main characters, Andy and Terry, who are being pressured by their publisher Mr Big Nose to finish their book the 13-Storey Treehouse. So it’s a book all about the book you are currently reading. Get it?

It’s no surprise then that the stage show takes the same approach except this time Andy (Andrew Johnston) and Terry (Matthew Lilley) have turned up for what they think is a rehearsal only to find themselves on stage without a script, props or costumes. Fortunately they have their stage manager Val (Eliza Logan) to guide them through the process and to step in and play various characters as required.

So the question is will our heroes actually manage to write and perform this play that we are currently watching? Mr Big Nose is worried and makes an appearance via giant video phone to pressure Andy and Terry along. It’s an hour of crazy nonsense, there’s a giant gorilla, flying monkeys, a sea monster and loads of other suitably off-the-wall distractions.

The cast are super fun and kept the packed audience fully entertained. The addition of a few musical numbers added little to the show though, either the songs needed to be punchier or could have been omitted completely. There are lots of interactive opportunities in the foyer such as drawing your own banana and depositing it in the banana factory and a beautifully illustrated wall featuring screens that allow you to view slide shows of man-made monsters that kids have submitted.

As a fully-grown adult I’m not the target audience so I took along a couple of mini reviewers to give their opinion.

It’s very similar to the book. It’s about two people that live in a giant treehouse and they have to write a play and they haven’t written a script or anything for it. They improvise and pretend and it turns out well. The really mean publisher even likes it. The best bit in it was Barky the barking dog and I liked the sea monster except the singing. I think people aged 3-11 will like it. – Iris, 10

The books are really good. The play is similar to the book because it’s like making a play even though they didn’t know about it. Mostly the stories are the same but in the play they have Val playing characters from the book. She was really good. The giant gorilla was the best bit; it looked so cool like King Kong. I really liked Mr Big Nose. I wasn’t a fan of the songs, they weren’t too great. My friend Arion would like this show and also people who are sort of whacky and have a fun personality would too. – Jasper, 10

The 13–Storey Treehouse is on at the Arts Centre Melbourne, Playhouse until April 13