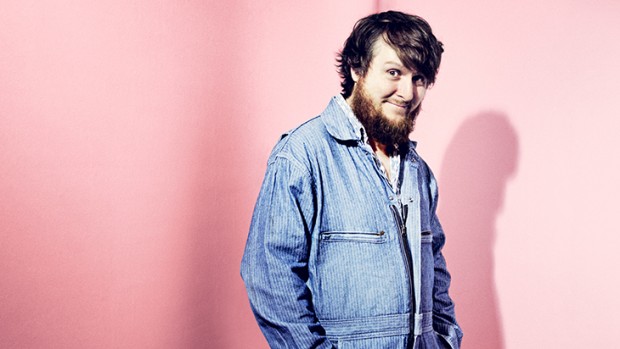 You can tell there’s a bit of quiet buzz surrounding this show. As I look around the Fairfax foyer pre-gig, I spot a few familiar faces: MICF institution Denise Scott, local funny man Tommy Dassalo (with youthful comedy Entourage in tow) and that guy from the RACV house-call ads. It fits with what I’ve read about Tim Key – the comedian’s comedian, the one other stand-ups go to see for inspiration, illumination and possibly because it’s a slow night mid-week.

Barry Award nominee, winner of the Edinburgh Comedy Award, and former Footlights member, Key comes with a serious pedigree. So it was with some excitement that I joined the star-studded audience at Single White Slut, the third of the very successful Slut Trilogy. I didn’t really know what to expect. Comedy? Poetry? Nouveau-meta art installations? Key is known for delivering up unorthodox and genre-warping shows and, sure enough, this was one of them.

We enter the auditorium to see Key on stage wearing a denim onesie, red socks and a smile. On stage is a bed, a Guinness can, two boots, a full mug of beer, a black filing cabinet and scattered playing cards. What follows is 80-odd minutes of some of the strangest anti-comedy you’ll ever see: a dark, elliptical tangle of short poems, anecdotes, audience participation and silent theatre. It’s a hard show to remember. Not forgettable, just intangible, like steam.

Tim Key doesn’t tell jokes. And he doesn’t do punchlines. His poems are funny as hell, but always in an oblique and unexpected way. Some end like a knife in the dark, others like a truck between your eyes. All are completely bizarre, brilliant and unpredictable.

See this show now, then boast to your mates when it takes home a Barry.