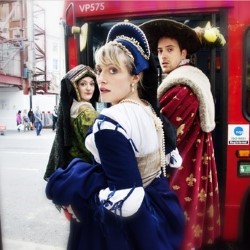 Technology is the future of the past. This show is set in Hampton Court Palace and follows the small group of Tudor re-enactment players, who show visitors the story of Henry VIII’s decision to divorce Catherine of Aragon and marry Anne Boleyn. On the day this is set, we also see their boss make plans to sack them and replace them with a Google Glass type experience.

The writer, director and star of the show is Lily Bevan and the other performers from The London Collective are – James Rastall, Sophie Bleasdale, Lily Bevan and Fraser Millward. The characters include a young man who has been recently bereaved, a young lady who “is into all that re-enactment stuff”, a wannabee actress who is hoping to be spotted and a lady who has just been recruited from the gift shop. Can they stop the plans of their boss and keep history alive, or will the machines win?

There is a wealth of historical detail in this show, some excellent comedy writing and costuming and excellent acting as the (real) actors act as (fake and often incompetent) actors. Best to forget that they are acting and just pretend you are at Hampton Court seeing the show, athough you should not join in and ask them questions during the Q&A. If you love a historical comedy/drama or a good bit of ham acting, you will love this show. The room is small but the seats are comfortable. This is a show the whole family CAN enjoy.

Mock Tudor is performed by The London Collective at Pleasance Courtyard.
For Tickets and more information go to the Edinburgh Fringe Website: