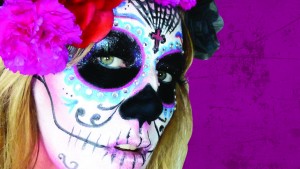 Mortality and the use of the big ‘D Word’ (death, for those of you playing at home) is a tricky topic to get right in comedy. Cath Styles gives her take on mortality with the telling of her own personal stories of the deaths of 3 of those closest to her. Particularly how it broke her, and how tacos, coronas and a little bit of face paint brought her back to life. Day of the Dead is a touching ode to those Styles has lost and a reminder to everyone else that life is short. This intimate show manages to dissect the humour out of a difficult subject.

While a little disappointingly rusty at times on her material, brushing the cobwebs off her notebook, Styles was honest and raw with her story telling. Establishing her love of the Spanish language early in the piece; and as the show progresses, you come to understand its significance to Styles and her grieving process.

Styles admits to always having an immense fear of death from a young age, even though she never dealt with its harsh reality until later in life. But as the old saying goes ‘When it rains, it pours’, with not one but three sucker punches from death all at once. Cancer taking the lives of her mother and best friend, while also losing the beloved family cat named ‘Cat’ (she hadn’t planned on keeping it for long). Styles reminisces on the fond memories of those strong and hilarious women, taken too soon by one of life’s most punishing diseases, as well as how the purr of a kitten can melt a heart. The realness of her circumstances giving her a big slap in the face, when not only did her doctor put a very small timeframe on her mother but also realising that not even her many variations of delicious and creamy homemade cheesecakes could keep her around.

It is safe to say that these loses where not an easy thing to come back from. Styles unhappiness with the way that death is dealt with in her own back yard, together with her sister decided to take control of their own destinies. They both Left stable jobs and incomes to pursue a life in the arts, but not before adding a 6th stage to their grieving process, nicely slotting MEXICO in just before ‘acceptance’. Sharing a trip to the ‘Day of the Dead’ festival together helped to put things into perspective for Styles. Their new found understanding of the Mexican culture helped them establish a new relationship with death and come out the other side, ready for a new beginning.

While no one-way of dealing with death is the same, Styles stands by the belief that life is short and if you are not happy, make a change. It is just a shame that it has to be a kick in the guts from the skeleton in the hood to remind you.