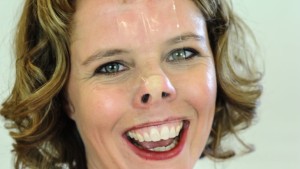 Honest and Hilarious Anne Edmonds brings big laughs from the moment she steps out on stage. The effortlessly funny lady reels you in immediately with her easily relatable stories, down to earth personality and her very well received pelvic thrusting.

From the trials and vomit riddled tribulations of early morning travel, when leaving for a family holiday New Year’s Day, to religion, her opinions on atheism and her catholic Middle Class Essendon upbringing. Edmonds doesn’t hold back with her eccentric and refreshingly honest show.

Bringing her stories to life with disturbing accurate characterisations and ending with lyrically moving banjo playing. Naturally and effortlessly linking stories and characters throughout. Edmonds kooky, lovable and unique comedy style is the reason for her growing fan base. You are even treated to a last minute special appearance and performance by ‘Pig Girl’. Something that should be missed by no one.

Not shying away from admitting that life can be far from perfect, the theme of sadness resonates throughout the show. Edmonds not seeking out reassurance or sympathy from the crowd, she simply admits to imperfection and how we are all together in sadness as we are in happiness and joy. As these are states and parts of life that none can avoid.

The only negative thing that comes from seeing Anne’s show is that you want to leave AS Anne, and well it’s unfortunately just not scientifically sound. Get in quick for her run at this year’s festival before anyone else finds out about her and the opportunity is gone for good.

Anne Edmonds You Know What I’m Like! is playing at Melb Town Hall – Portico Room