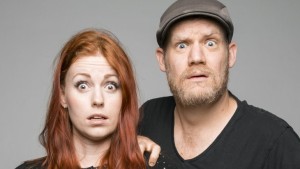 When stand-up/ventriloquist Sarah Jones and standup/magician Nicholas Johnson got together to create the wildly successful Pajama Party it was pretty obvious that they have a fabulous rapport as a comedy team. It’s wonderful to see them build on that as Jonestown with their new Moosehead Awarded show Guinea Pigs.

The show begins with a reassuring fairly traditional opening monologue by Sarah that really highlights what a brilliant standup comedian she is even without her ventriloquist puppets. It settles the audience in and lets us know that we are in safe hands. She is eventually joined by Nick and the show can start going off the conventional rails. We soon learn that while retaining the sense of fun of their first outing, this is more assured and cleverly constructed production with a very different atmosphere. Guinea Pigs is a bit more science-fictiony. The dynamic duo soon find themselves locked in a sealed white room and being experimented on by a sort of villainous but polite looney scientist who is performed by a disembodied voice otherwise know as Andy McClelland.

The experiments carried out such as The Sanford Prison Experiment and the Milgram Experiment are apparently famous. There were audible noises of recognition from the audience but I’d not heard of the names of any of them, or Radio-lab (an American radio show/podcast about science) which they referenced. I knew of some of the experiments from descriptions and depictions in the media and other tests such as shock treatment are pretty well known. My ignorance of science did not matter at all because Sarah and Nick know how to entertain the whole audience and it was fun watching social conventions being stripped away as they approached these tests in various silly ways

It was interesting to note the lack of magic or ventriloquism, considering the specialist talents of the performers involved, but they were not missed in a show jam packed with various exciting stunts, genial audience participation, fanciful flashbacks to a fictitious back story and a gorgeous black theatre puppet show. I was slightly disappointed the screen couldn’t have been used a bit more but the wait to find out what it would be used for was certainly well worth it. The end felt a teensy bit wobbly and not quite up to the quality of the strong beginning, but over all the script is well written and the performers are a joy to spend an hour with.

Guinea Pigs in other comedian’s hands might become a Gothic horror sci fi comedy, but with Sarah and Nick things never get too far down the dark path. It’s all fun and games, a bit of a romp with a scifi bent that keeps the audience on side at all times. There is the odd rude word & mild adult reference but this would be an excellent Festival show to take friends or family to, especially families with kids over 16, you’re all bound to have a ball.

Guinea Pigs is on at the Portland Hotel until April 19