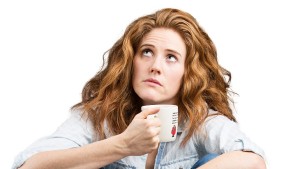 A story can change how real-life events actually transpired. Reality can be edited, enhanced, or even transformed completely to create a recount that may or may not be entirely accurate. That is the beauty of storytelling – that true events can be artistically altered for personal preference or entertainment value – and Sarah Kendall is an excellent storyteller.

A Day in October is a story about Kendall’s childhood, and a traumatic moment at a pool on a school camp that has remained with her since 1990. On this particular October day, something very unexpected happened to a boy at her high school, and she tells a touching tale about the events that came before and after this significant memory.

We hear about the school she went to, the students who went there, and the constant fear that she experienced day after day as she did her very best to be invisible. She tells us about the town she grew up in and her weekend job, and it becomes clear very quickly that this is not really a comical show; it’s a poignant story about a period of time in Kendall’s childhood, which includes some light-hearted, funny moments in between some fairly dark material.

A story like this one needs to be detailed to be effective, and Kendall has a natural ability to be incredibly descriptive but still maintain a clear and succinct structure. The show flows well, and while there is the occasional throwaway comment that doesn’t seem to fit in with what is being said at that time, this information tends to be of importance further along in the show. Everything interconnects nicely, and makes for a compelling sixty minutes.

Kendall speaks like she is having a casual conversation with friends; she is engaging and likeable, with a ton of energy that she throws into large physical gestures to further inject life into her story. The few moments she briefly moves off-script and interacts with audience members also indicates that her stand-up abilities are great, and it would have been nice to see a little more of that banter in this heavily scripted show. The descriptions about her unpleasant duties at the part-time job she despised are hilariously relatable, and her memories of trying to ‘micro-manage’ a bullied boy at school by suggesting he change who he is as a person is both funny and grim. Not every joke worked, in particular some movie references that few people grasped, and an off-the-cuff remark about looking like an ISIS bride, but Kendall moved on seamlessly, and was not visibly affected by the audience’s undecided reaction.

A harmonic sound effect that she uses to coincide with the couple of times she mentions a creepy store mascot is a little unnecessary, and a bit at the beginning about the plot holes in the movie Aliens does go on for a tad too long, but these are minor critiques which don’t really detract from the story at hand.

Unpredictable and clever, A Day in October is a moving recount with a seamless balance of dark moments and light humour. It is not a show to see if you are looking for fast side-splitting laughs, but the depth and detail to Kendall’s sad story is certainly something special.

Sarah Kendall’s A Day in October is on at Melbourne Town Hall until April 19.