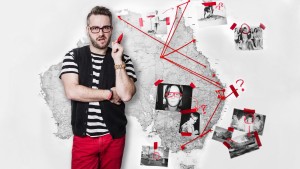 With 60 houses in 33 years, Christopher Welldon has certainly led a colourful life that was constantly on the move. Using a large map of Australia to plot out the course of his constant migration, he presented fascinating stories stretching from early childhood to the present that regularly had the audience rolling with laughter.

His recollections as a naïve child heightened the strangeness of his slightly unorthodox family life and had the audience chuckling and shaking their heads in disbelief at how these things could actually happen. Some of his tales were extremely heartbreaking and terrifying, providing a sharp contrast to the wacky hijinx, but he was confidently able to reassure us that he survived these ordeals intact and could see the funny side of them.

Adapted from his blog of the same name, the text had been edited into a lean muscular script with humorous lines crammed into every nook and cranny. With so much ground to cover in a limited time, his colourful turn of phrase and economy of language was brilliant.

Welldon was a master storyteller and had everyone transfixed. His background in breakfast radio shone through as he demonstrated how to effortlessly engage with an audience and keep the comedic momentum rolling. He regularly bounced off members of the crowd and got in their faces, not in a threatening way but as humorous punctuation. A highly animated delivery provided plenty of colour and movement and his slightly snarky attitude really brought out the ridiculousness of the stories.

Rush out to see this show immediately – it is a brilliantly riotous rollercoaster of a show. If you happen to miss out on this week long run at Fringe or are out of town, the next best thing is to pour over his blog (http://christopherdoesntlivehereanymore.com/) that goes into immense detail of all the stories covered in this show assisted by plenty of audio/visual illustrations.