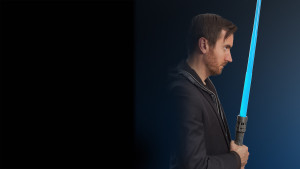 Every child has something in their life that opens their mind up to the possibilities of the future. For some, it might be a particular book. For others, it may be the discovery of a sport. For Rob Lloyd, it was Star Wars.

The Heart Awakens is the third part of Lloyd’s Obsession trilogy – nerds do love a good trilogy – exploring his first love, Star Wars. However, it’s more than an ode to a single film series. The show sifts through Lloyd’s serial obsessive relationships with pop culture entities. It’s an autobiography told through fandoms. With each new fascination, Lloyd discovers more about who he is and what he can become.

Lloyd tackles the topic of fandom with a lot of tenderness. There are plenty of niche jokes in there for the geeks in the audience, but the greater story of connection is one that everyone can relate to – largely thanks to a clever metaphor that Lloyd brings to life on the stage. Jen Speirs is fabulous as the various loves Lloyd has had over the years, capturing the sweet inspiration of their first meeting through to the bitter betrayal of later years/certain prequels.

The Heart Awakens is more heart-warming than it is tears-down-your-face hilarious. It’s a gentle comedy that provides interesting insights into how Lloyd got to where he is today. A beautiful ode to the power of popular art, The Heart Awakens is a must-see for anyone who has fallen in love – particularly if that love involves awesome robots.