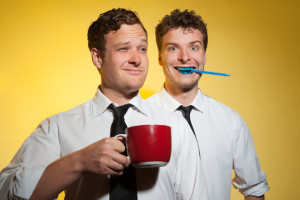 In Uncompetent, Oliver Coleman and Emil Freund have created a sketch show with all the essential elements for a good time. Bold characters that project to the back wall? Check! An economical script with plenty of punchlines? Check! Performers willing to do anything for a laugh? Check! Props? Check! The only thing remaining is for an audience to strap themselves in for an hour of crazy sketch action.

Coleman and Freund are reminiscent of Monty Python in their delivery and the way they structure the show. Sketches veer off in a myriad of unexpected places and sometimes end oddly, transitions are abrupt and their wacky characters are suitably over the top. Add plenty of silly voices, dodgy foreign accents and huge gestures, and you have the perfect homage to the deities of sketch with plenty of modern twists and references.

A clever framing device of “Market Research” is a great way of incorporating some mild audience interaction that is never at the expense of the punters. The patter is tightly scripted and puts themselves clearly at the butt of the joke. The late hour allows the guys to indulge in some risqué concepts and genuine gross out moments that simultaneously repulse and delight the crowd.

Every sketch goes into many hilariously surprising directions with a unique crazy logic to keep everyone on their toes. There are a few sombre moments that stick out like sore thumbs amongst the lunacy. These don’t necessarily lead to punchline but transition into something else while keeping the audience glued to every word. These segments fit perfectly with the overall plot, despite the performers cheekily criticising their own narrative structure.

The boys bounce effortlessly off one another and sell the shit out of their wonderful script. Neither are above making themselves look stupid and although Freund generally plays straight-man they can switch roles when the need arises. With minimal costuming (save for one pivotal character) they conjure a world of grotesque and strange characters and utilise plenty of props that look like effort has gone into constructing them while still having a thrown together feel. Reactions to musical and lighting cues, sound effects and voiceovers are pulled off without a hitch.

Coleman and Freund are an awesome powerhouse in two handed sketch comedy. This late night hour of silliness is a brilliant way to cap off your night.

Uncompetent is on at the Tuxedo Cat until April 5
Visit the Comedy Festival website for details
http://www.comedyfestival.com.au/2016/season/shows/uncompetent-coleman-freund