Celia Pacquola jumps straight into her show, absolutely no faffing about. No ‘How are you all tonight?’ or any such guff. Celia’s had a busy year and there is a lot to unpack, she has no time for padding.

She does begin by sympathising with the audience about how hard it is to drag yourself off the couch to go out. Celia’s been out and about a lot, apart from stand up, she’s been making TV (Utopia, Rosehaven, A Beautiful Lie etc) and winning awards etc. The first section of the show is just the jokes about her busy life that many people would envy, but by the end a lot of this  can be seen by the audience in a different light.

Her show is called All Talk and that’s what it is; pure unadulterated stand up. No set, no audio visual support, costumes, wigs, big props or audience participation. There is always her relationship with the audience that she muses about and I like that she doesn’t need to pick out a single person to  make a connection. We are here and onside, some of us have been following her career from before her 1st Festival show. She recognizes she also has a new audience who’ve come to see “that nice girl on that sweet Tasmanian TV show” (Rosehaven). And she is and always will be.

Celia worries about taking us into some surprising and controversial places but she isn’t apologetic about it; ‘This is the show this year’. She’s earned the right to gently take us into some darker territory, she has always done this so well. It’s not the 1st time I’ve found myself shedding a tear in a Celia Pacquola festival show, though it may be just me this time. It’s not really a sad show at all, often hilarious, but so personal. I was just briefly moved by her bravery, whereas her first ever show Am I Strange? (Critics Award MICF 2009) had me weeping for days. There was a sense of #MeToo about Am I Strange?, even way back then. It was about shockingly shitty boyfriend behaviour and I really related to it at the time. This show visits the #MeToo movement briefly but is more importantly about maintaining your mental health in stressful times.

Behind the constant laughs, Celia has constructed a subtly intricate stand up show with witty one liners and sharp observations as well as layers of stories and call backs. It’s about growing up and the importance of taking care of herself while giving her audience the best performances she can muster. All Talk is a stunning, ultimately joyful, autobiographical festival show, we can only hope that her screen success doesn’t stop her from creating more of these and (maybe after a bit of a well-earned holiday), that she’ll soon be back catching up with her mates, er, audience.

All Talk is on at The Comedy Theatre until April 17
https://www.comedyfestival.com.au/2018/shows/celia-pacquola-all-talk 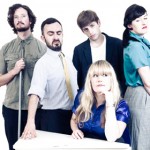