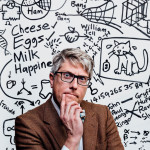 This will be my second review of a science-related show this Fringe Festival, this time the subject matter is the larger scale of the Universe rather than the origins of life itself.

This show held a special attraction for me as I have always had a fascination with physics, but lacked the mathematical abilities to pursue it as a career. Similarly, the show includes lots of cooking which is another interest of mine. All that this show needs would be conjuring and it may well be my ideal show.

As the title suggests the intention of Kitchen Cosmology is to simply explain the current understanding of how the Universe formed and progressed to its current state with the help of baked goods.

If you are fascinated by such exotic concepts as the Big Bang, Galaxies, Dark Matter and Radioastronomy but – much like myself – lack the necessary understanding of the finer points of maths and physics, then this is the show for you.

Beginning with a nice gag about needing a space License, Chris Lassig takes the audience through the first few microseconds following the Big Bang with the aid of popcorn and the following seconds using a raisin pudding.

This is a well-structured show delivered with clarity of ideas and excellent comic timing to ease the understanding of some of the complex ideas being used. Lassig uses his props and projections well and ropes-in a couple of audience members to assist with one segment involving the collision of galaxies represented by two chocolate tarts.

The audience laughed along to such unlikely humour based around complex chemistry, radio telescopes and Stephen Hawking which is no mean feat and a testament to the performance skills and timing of Lassig himself who is ably directed by Ben McKenzie.

Along the way there are bad puns, pop-culture references and lollies and the ideas clearly fire the imagination of the performer as he keeps track of key events in the formation the Universe and his baking with a digital timer which beeps at key points throughout.

Lassig’s enthusiasm for his subject is clear from the very beginning and does not flag throughout his performance with him putting energy into each segment. The pace of his delivery keeps the ideas flowing, whilst allowing for clarity of understanding and leaving room for laughter.

Kitchen Cosmology by Chris Lassig is on at Tuxedo Cat on Wills Street at 6pm until September 28th.