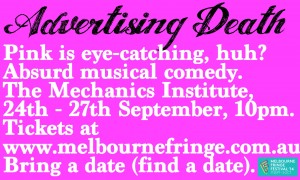 A pair of Funeral Directors in financial and ethical trouble, a soon to be grieving widow, a corrupt doctor and a kinky priest; some great characters for a comedic play. The band George Glass (Nic Conway, Pud Hamilton, Henry Koehne, Alister McMichael and Daniel Murnane) attempted to stage their story as a Rocky Horror styled comedic rock opera but found that they didn’t quite have the abilities of Richard O’Brien.

The plot had plenty of twists and turns, so many that it was easy to lose track of what was going on if you weren’t paying close attention. All the characters were repugnant souls, even the ones initially portrayed as objects of sympathy, and you were supposed to laugh at their lack of morals but beyond that they didn’t exhibit a lot of depth.

This was billed as a dark comedy but the actual comedic content of the script was somewhat lacking.  You could see that there were some potentially great ideas in there but the writing and execution were not quite up to par. They often went to tasteless territory just for the sake of it and didn’t hit on anything particularly witty. There were some amusing lines within the script but the cast had major issues with timing and the general ability to sell these lines so most of it fell flat.

One saving grace was their talent as a band. They all had the musical chops to write catchy songs and swap between instruments, but this didn’t help them as purveyors of comedic songs. The initial songs each had a funny line repeated ad nauseam but, combined with the lousy sound mix when the full band kicked in, it was difficult to pick out anything else amusing. Later songs went the melancholic route to add some emotional texture to the show. A few tunes appeared to have been shoehorned in so their relevancy to the story was vague at best.

A hell of a lot of effort went into the staging of this play. There were plenty of costume changes to bring the characters to life and elaborate props were used in key scenes which unfortunately led to extended periods of a dark stage as they struggled to change for the next scene. Our raised hopes for the climatic ‘Funeral of the Century’ came close to being fulfilled with a number of fun surprises. All this colour and movement certainly went a little way in maintaining our interest in the story.

After seeing this show, I learnt that it has had a number of runs previously, but nothing appears to have been learnt from these performances. It’s a shame as this has a lot of potential to be a great show but in its current form it still falls way short.

Advertising Death is on at the Brunswick Mechanics Institute at 10pm until September 27. 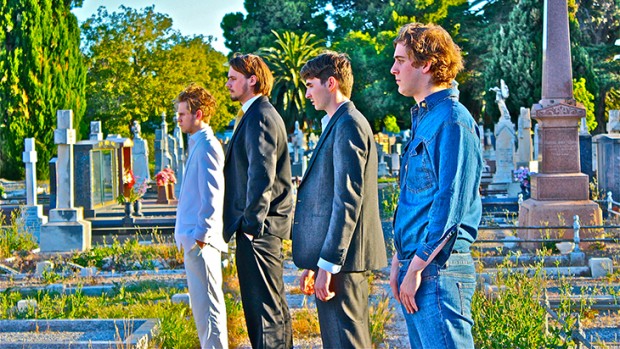 The George Glass Boys have taken their musical ensemble to the next level by building a black comedy about love, death and revenge around their music.

The Frissal Brothers, who smell faintly like con-men are staring down the barrel of bankruptcy as Frissel Funerals’ loans have run dry. But just as they accept this fate the funeral opportunity of a lifetime comes along. The only challenge is that unfortunately the old man the funeral is for hasn’t quite popped off the perch yet. Plots aplenty ensue.

Scenes are interspersed with a full complement of musical numbers; the actors transforming into the band and then back again. There’s dance numbers, an odd acrobatic stunt or two, and not an insignificant amount of costume changes; involving a large amount of rather ludicrous drag.

Like a number of theatre pieces that have registered for the Melbourne Comedy Festival, this piece probably suffers from the expectation created that this is a laugh a minute comedy. There are jokes, but they were muted in their delivery and created very little punch. While the premise for the story was a fertile one; death, romance, doctors, widows, preachers and dodgy business men all make for chaotic comedy, this play didn’t quite get there. Sadly the acting of several (but not all) the cast was rather tepid; feeling like people delivering lines rather than fully embodying their characters. It seemed that there was an expectation that the drag was supposed to accrue more laughs than it did. It felt like the play was built around the music, which was the strong point of the performance. Sadly the plot also has gaping holes too – it’s really not clear how one of the main characters met his end.

This play needs a lot of work before the comedy, plot and acting can match the quality of the music.

Advertising Death is on at Mechanics Institute until April 19
http://www.comedyfestival.com.au/2014/season/shows/advertising-death-george-glass