Impro Melbourne’s Theatresports is an old standby of the Melbourne comedy calendar, attracting many of our best improv comedians over the years. It’s impossible to predict what you will see in any given performance and it’s usually a solid bet for an entertaining night out but this year it seems to have changed direction, taking on a more family-friendly guise.

The evening is divided into three sections: free play, the Danish round – in which the audience judges the scenes, and the usual competitive round, where points are decided by two official judges and one audience ring-in. Teams compete over the course of the season, until a winner is decided at the Grand Final in November.

All the players were accomplished improvisers, working well together to keep scenes moving. Rik Brown was a stand-out, consistently providing laughs and holding things together. Jamie Cerda and Katherine Weaver’s two-person team Para Dos was gloriously chaotic. Their scenes often had little to do with their prompts, but were hilarious none the less. Musical improviser Dan did a wonderful job of scoring the night.

It is obvious throughout that this year’s Theatresports is aiming itself squarely at young families, which seems an odd choice for a Sunday night show. Surely the kiddies should be getting tucked into bed, ready for school the next day. Host Jenny Lovell’s performance had the tone of a kindly schoolteacher, praising us for being a good audience, and distributing hard candy at various intervals. She did a great job of keeping the energy up and the kids in the audience were loving it.

To keep things on track and out of the gutter, there were a couple of tools at the judges’ disposal – a horn can be honked to end a scene that isn’t working for whatever reason, and a penalty basket can be placed on the head of any player that strays into crude and obscene territory, locking them out of the next game to be played. Though the basket wasn’t used, there were a few scenes brought to an untimely end by the horn for reasons of taste.

At times, the censoring felt arbitrary. A lengthy scene entirely about purchasing condoms was fine. Another in which a nude Satan seduced a door-to-door bible salesman was good to go. However, once the judges were in charge, a single swear word could bring a scene to a screeching halt. One game of ‘second chance’ that looked to be really promising was ended in under a minute due to the use of an unsavoury word. The process was jarring, and left me resenting the judges – and not in the fun pantomime booing way that Lovell was promoting. It was unclear whether the players were fully aware of the restrictions on themes and languages beforehand, or if they were simply forgetting and slipping up. The result was a show with a confused tone – a little too adult to be totally family-friendly, but too sanitized to allow the players to really let loose.

Impro Melbourne’s Theatresports is perhaps best for families with young teens – kid-friendly provided you don’t mind your little ones hearing the odd bit of salty language or an impromptu lesson on the magic of birth. It’s a good place to introduce them to improvised comedy, and the talented performers will ensure you have a few laughs yourself.

Impro Melbourne – Theatresports is on Sundays at 7:30 at The Space in Prahan. The Grand Final will be held on November 29 at the Kalide Theatre at RMIT. For tickets and info, go to: http://www.impromelbourne.com.au/ 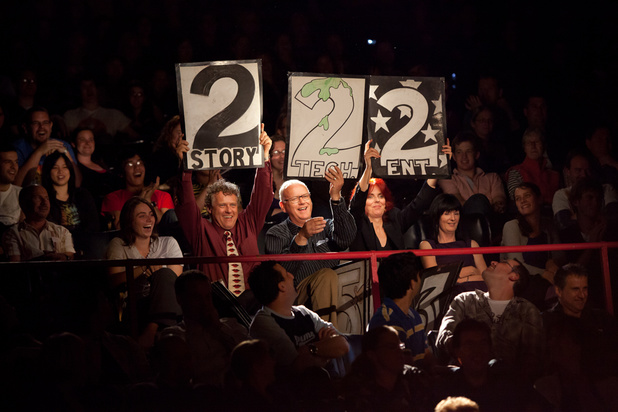