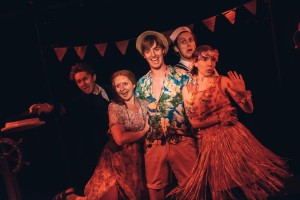 Apocalypse Cruise Ship Love Affair is an enjoyable all-singing, all-dancing, musical extravaganza about a fully catered journey to the Apocalypse. Brought to us by Beach Comet, the team who did Vampire Hospital Waiting Room last year and later took it to the West End, I knew this was going to be an adventure that would be worth setting sail for.

This year’s show is set on a Caribbean cruise ship and begins dramatically with a character called Mandy falling overboard. Cut to twenty years later and the captain is still mourning the loss of Mandy. Meanwhile his first mate Fetters is obviously infatuated with him, the cruise director with a comically strong New Zealand accent is about to fall in love with a passenger called Evie (something which is against ship rules) and two elderly passengers are looking for a bit of love and fun on the high seas.

The captain is convinced Mandy is speaking to him from beyond the grave, and he alters the ship’s course to head toward the centre of four massive storms. Can the crew and passengers stop him, or will the coming end of all mankind actually turn out to be a way out of all their troubles?

The six performers sing and dance with enthusiasm and varying degrees of proficiency. The jokes come thick and fast, the plot is over the top and the audience are swept away (sorry) with the fun and plot twists until the huge finale. A rollicking crazy and high energy show, and you can even buy merchandise at the end, if you want to sing along at home afterwards. The songs certainly stick around in your head for a while. Definitely worth the trip.

Apocalypse Cruise Ship Love Affair is on at The Gilded Ballon Teviot until Aug 29th. 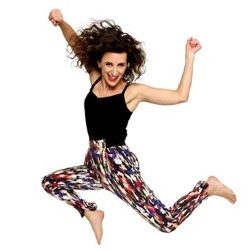 Fabulous Australian hyperactive comedian Felicity Ward is back with brand new show about her quirky self. She’s been spending a lot of the past couple of years living in the UK, working hard at her craft in London clubs and it shows.

This year, Felicity is talking about anxiety, living in London and the joys and dangers of swimming pools. She shares the wonders of underwater headphones and the pitfalls of having a Japanese exchange student coming to stay.  For fellow expats like yours truly, Felicity gives the audience tips on how to act like a Londoner (never make eye contact), the etiquette of using public transport in the capital, the problems with long distance relationships and problems with training distant family members to utilise modern technology to maintain contact. I enjoyed her deep and thorough analysis of Reality TV Makeover shows and then, the most popular topic with the audience, why do women’s clothes not have pockets – even worse, why do they have bits which appear to be pockets but are really just sewn on bits pretending to be pockets?

In the past Felicity has spoken of her issues with anxiety and though it pops up here and there, for example when she explains how she lost a bag without giving in to panic, and what happened when she let it all go, it is not the main topic of the show which is more about bringing the laughs that she has no trouble inducing. The audience was in fits.

It was a packed house and Felicity gave us an hour of hilarity, constantly moving about the stage like a lion and hardly pausing for breath between jokes. One of the top feel good shows of the Fringe. 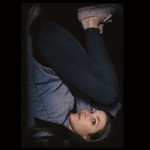 Naomi Peterson has been trapped in the theatre for the last year. As she so succinctly explains to the audience in the opening number of her show, this is due to her fear of the outside world.

Naomi goes back in time to explain the events leading up to this self-imposed isolation through songs and stories. We learn of her love for a certain pizza chain and the traumatic loss of a pet, plus tales of well organised bullying at school, a mental breakdown at university (featuring the funniest “sexy” dance of the Fringe), a look at some of the dangers of the working world and the targeting of an audience member, with the show ending on a triumphant note.

Naomi is surprisingly  vivacious, at times perky and occasionally aggressive. Throughout the hour she treats us to a number of well sung original tunes, amusing and poignant anecdotes and traumatic tales of growing up feeling that she was not the most beautiful or talented person in school. It’s an excellent performance from a talented and beautiful young comedian and well worth experiencing.

A couple of warnings about the performance space though: the show is down some steep stairs and the seating is all backless padded benches (except the back row). Not comfortable for those with back problems and not the best venue for any audience members with mobility issues or a bit of claustrophobia but a fitting venue for this show. 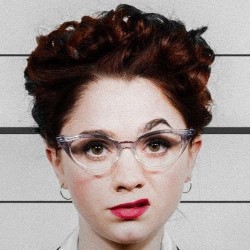 In Chick Ruby Thomas plays a wide variety of characters that show off her acting and comedy skills. Starting with the ‘edgy’ morning chat show host Simon she goes on to play all the important women in Simon’s life and is ably assisted by Chris Adlington in many supporting roles. The setting is a morning chat show with an odious host who needs to learn a lesson, but that’s just an excuse to set up a series of sketches exploring women’s place in society through the past century.

The stage is set when Simon makes an appalling sexist faux pas live on TV which is followed by a montage of amusing of celebrity magazine cover exposes of the next 18 months in his life, before Simon returns (contrite and calmed down) to present a special look back at the important women in his family. We are all magically transported through history and meet his great grandmother in 1912, who learned that talking to gentlemen on the telephone can be a profitable way of making money and releasing tension.  His grandmother in 1941, who married a German and was unable to cure her unhealthy addictions, followed by his liberated aunt in 1969 who had a member of the audience in a very compromising position, his dominating cousin in 1986 who found the perfect job and his Welsh niece who is a pioneer vlogger. We finish with Simon’s sister Bindi, a trippy hippy conceptual artiste/singer/actor. They are all pretty entertaining characters, though there is no clever tying up of the premise at the end.

Ruby and Chris do a brilliant job in bringing all the characters to life (aside from the odd audience member dragged up on stage which seems to be obligatory these days), and there are laughs aplenty from the duo as they travel back and forward in time with a lot of very naughty sketches (especially the on-stage gynaecological examination and the phone sex). An entertaining debut Fringe performance that will no doubt improve as the Fringe progresses, and much better than the poster may indicate.

Chick is on at Just The Tonic at The Caves until August 28
https://tickets.edfringe.com/whats-on#q=%22Ruby%20Thomas%3A%20Chick%22 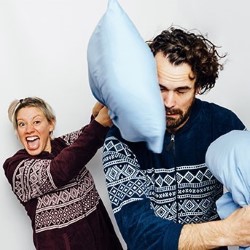 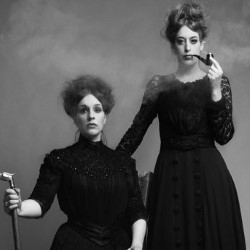