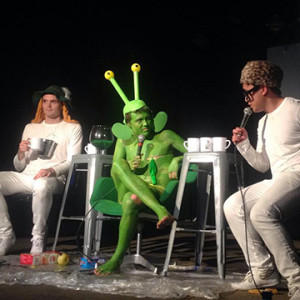 Whoo Boy! You know that you are in for a wild time when a show is advertised as a being like “Dr. Phil on ketamine” that’s hosted by a “naked party-alien”. Zanzoop: Feeble Minds, the result of a collaboration between Sam Campbell, Tom Walker and Aaron Chen, is a glorious mess of a show and is sure to be a late night cult hit of the festival.

The titular character of Zanzoop (played by Campbell) is a wonderfully snarky and aggressive creature who spends the show interviewing a cavalcade of bizarre characters and attempts to sort out humanity’s various problems. We meet people such as a ball-boy and his handler, Owen Wilson and Jackie Chan, and a promiscuous bird. His “solutions” are formulated via some truly unique and amusing means that may or may not help but are amazing spectacles.

While on the surface this show may appear to be lots of weirdness just for the sake of it, there is some depth to this strangeness. Some of the routines will leave you scratching your head but this world has its own bizarre logic and sticks to it. From surreal concepts to gross out jokes, they run the gauntlet of humour and even manage to sneak in a bit of social satire into this lunacy.

The show is played so loosely that it is difficult to separate the scripted lines from those that are merely off the cuff remarks. With all the cast constantly on the cusp of corpsing you can see that they are often caught on the hop as to where things are actually leading. When Zanzoop takes on board the odd interjection from enthusiastic punters, things threaten to go further off the rails. As to whether these are pre-planned (they do thank their “plant” at the end) is a matter of contention. Campbell regularly breaks character to offer honest appraisal of the stupid shit going on; a nice little touch that puts the audience at ease when things get a little too weird.

The costuming is brilliantly second rate with wonderful attention to detail. White bodystockings act as blank canvas for most of the characters with all sorts of elaborate headgear used to flesh things out. Aside from the slapped on body paint getting all over, things get rather messy on stage as anarchy ensues. Video footage is used with mixed results but mainly exists for some demented shock value.

If you’re not a stickler for neat narrative structure and perfectly delivered lines, this will appeal to you, particularly those who like it weird. Put on your freaky hat and rush out to see this!

Feeble Minds is on at Roxanne until April 16