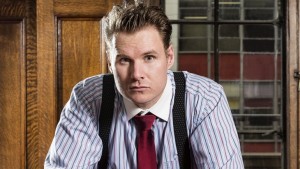 At the top of Sell Mum Into Slavery, Damien Power explains that the concept for this show came to him in a dream. The leaflet left on every seat has, in addition to some promotional material for his other projects, philosophical quotes from Nietzche, Zizek and Sagan. This just screams stoner student presenting some heavy concepts that all must be made aware. The reality turns out to be not ham fisted at all, instead we see a deep, thoughtful, articulate and slick hour of stand up exploring humanity, its evolution and the future.

Ideas such as natural selection, the future of genetic engineering and political ideologies get his considered treatment. He doesn’t clobber you over the head with his viewpoints, instead giving us some clever and hilarious observations about the world for us to mull and laugh over. His persona as a working class philosopher is key to the success of his delivery as it softens things when punching down to the Bogan element and doesn’t get bogged down in university student styled rhetoric. This material is clearly aimed at the middle class; on the surface it’s comforting to that audience in we care about that the big picture but he isn’t afraid to call us out on our hypocrisies.

Woven into the fabric of this show is some autobiographical material that both explains the genesis of the show as well as providing personal context to his ideas. Particularly clever is the way his inner thoughts are revealed through amusing analogies and call backs.

I have reports that the other show he is involved with, True Australian Patriots Live, is a brilliant companion piece to this show. A number of the ideas explored here find their way into that show but the tone cannot be further away from this considered thought piece.

Power is an extremely confident and polished performer. His cadence is deliberate with not a word out of place. His character work is brilliant as he often employs role reversal scenarios to highlight a point with hilarious results. This a masterclass in stand up that new performers should study.